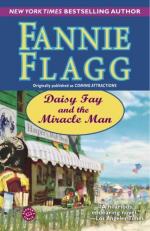 Fannie Flagg
This Study Guide consists of approximately 39 pages of chapter summaries, quotes, character analysis, themes, and more - everything you need to sharpen your knowledge of Daisy Fay and the Miracle Man.

This detailed literature summary also contains Topics for Discussion on Daisy Fay and the Miracle Man by Fannie Flagg.

Daisy Fay and the Miracle Man is the first novel written by acclaimed novelist, actress, and comedian Fanny Flagg. This novel is the diary of a young, southern girl that chronicles her life from her eleventh birthday until the day she packs her bags to leave Mississippi. It all begins with a big opportunity to own a malt shop that moves Daisy Fay and her family from their home in Jackson, Mississippi to Shell Beach, Mississippi, another scheme among many in which her father hopes they will strike it rich. Like the others, this venture sours, but not before Daisy finds humor in the dead animals in the freezer and the tunnels she dug that nearly sent the entire shop collapsing into the sand. Daisy Fay and the Miracle Man is a novel full of humor that is about southern ideals but also about breaking free of those ideals and becoming your own person. It is a novel readers of all ages will enjoy.

Daisy Fay receives a typewriter for her birthday, so she uses it to write a diary about the important events in her life. This begins with her father's desire to buy a half interest share in a malt shop in Shell Beach. Daisy's father has trouble getting this money together, making it appear that the family will remain in their home of Jackson, Mississippi. However, a win at bingo for her mother provides the necessary cash to buy into Mr. Harper's latest scheme to strike it rich. The town of Shell Beach turns out to be nothing but a bump on the road to the more popular vacations spots in Louisiana and Florida and the malt shop a shack on the beach. It does not matter to Daisy, however, because she is caught up in her father's excitement.

As the Harpers begin meeting their neighbors, Daisy finds herself forced into the Junior Debutante club run by a local woman who was a popular debutante herself as a child. This group includes Kay Bob Benson, a local girl who looks down her nose at Daisy every chance she gets. Daisy settles into life and helps her father around the malt shop. Daisy befriends a neighbor boy as well, spending the summer with him and her pregnant neighbor. When school begins, Daisy finds herself falling in love with her teacher and going against character by actually paying attention in class.

Unable to make a big payment on the malt shop, Daisy's father burns the shop down. Fed up with his infidelity, his drinking, and his crazy schemes, Daisy's mother goes to live with her sister in Virginia. Though she misses her mother, Daisy is pleased with the attention this situation garners from her teacher. Then one afternoon, Daisy and her friend, Michael, are playing on the beach and they find a dead woman. Daisy recognizes the woman as a girlfriend of a local gangster. Daisy is advised to keep this knowledge to herself, so when the FBI comes to talk to her, she refuses to say anything until her father forces it out of her.

A few weeks later, Daisy sees the gangster watching her at the local fair. Daisy runs away and tells her father, who disappears into the night. The next morning, the gangster is dead and Daisy is convinced her father killed him. A short time later, Daisy's mother takes her out of her father's clutches and moves her to a Catholic boarding school. Daisy stays there for three years, only to return to her father's care after her mother dies of cancer.

Daisy befriends Pickle Watkins in high school and together they scheme to become one of the popular girls. However, Kay Bob Benson, Daisy's mortal enemy, beats them to the punch again. When Daisy fails algebra, she has to move to Jackson to go to summer school. Daisy and Pickle lose touch; later Daisy learns that Pickle became pregnant and had to get married. When Daisy visits her, she discovers that the Pickle she once knew no longer exists.

Daisy begins working at a local theater and is soon the star of many of their productions. Daisy falls in love and becomes engaged, but her fiancé ends up marrying a different girl instead. Daisy's friend talks her into competing in the Miss Mississippi contest in order to win a scholarship to acting school. The competition almost does not happen, however, when Daisy's father asks for the money she has saved. Daisy feels she owes it to him for killing that gangster but later learns he did not kill the man. Daisy's friends help her go to the competition anyway and she wins the entire contest with some help from her family and friends.

More summaries and resources for teaching or studying Daisy Fay and the Miracle Man.