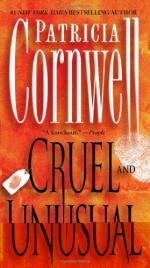 Patricia Cornwell
This Study Guide consists of approximately 41 pages of chapter summaries, quotes, character analysis, themes, and more - everything you need to sharpen your knowledge of Cruel & Unusual.

Waddell stole a briefcase from Robyn Naismith's house the day he killed her and later discovered it belonged to Joe Norring, then the district attorney and now the governor of Virginia. Scarpetta believes Norring orchestrated the release of Gault in order to find the briefcase in the aftermath of Waddell's death to protect his career and reputation.

Ronnie Joe Waddell is executed in the electric chair for the murder of Robyn Naismith. Later Dr. Scarpetta is required to see the chair in order to verify that abrasions on Waddell's arms were made by the chair.

Robyn Naismith's body is found propped against her television after her murder.

The body of Eddie Heath is found posed against a Dumpster in a mirror image of Robyn Naismith's body when it was found against her television.

Robyn Naismith was killed in...

More summaries and resources for teaching or studying Cruel & Unusual.