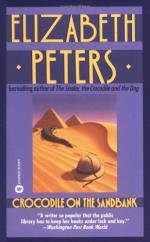 Elizabeth Peters
This Study Guide consists of approximately 45 pages of chapter summaries, quotes, character analysis, themes, and more - everything you need to sharpen your knowledge of Crocodile on the Sandbank.

Crocodile on the Sandbank Summary & Study Guide includes comprehensive information and analysis to help you understand the book. This study guide contains the following sections:

This detailed literature summary also contains Topics for Discussion and a Free Quiz on Crocodile on the Sandbank by Elizabeth Peters.

Crocodile on the Sandbank by Barbara Mertz, (whose pseudonym is Elizabeth Peters) is the first of her Amelia Peabody series of a Victorian era woman learning the science of Egyptology. Amelia Peabody had no intention of becoming an Egyptologist. Rather, she is much more interested in doing the things that she would like to do. She spent most of her youth caring for her aging father, who eschewed the mores of his time and taught Amelia scholarship. With the inheritance she receives after her father's death, Amelia wishes to see the world that she and her father had studied for so many years, starting with Rome, Italy. In Rome, Amelia meets Evelyn Barton-Forbes, a gentlewoman who is destitute and dispossessed. In true Amelia Peabody style, Amelia takes Evelyn under her wing and installs her as her new traveling companion. Amelia and Evelyn are as different as night from the day, yet their friendship flourishes into a sisterly fondness for one another.

The next portion of Amelia's itinerary takes them up the Nile to Cairo, where the two women stay at Shepheard's Hotel for the time it takes for Amelia to make arrangements for a more private tour of the Nile. While in Cairo, Evelyn's ebullient cousin, Lucas, manages to track Evelyn down and attempts to sweep Evelyn off her feet with offers of marriage and a share in the inheritance her grandfather denied her before his death. Knowing her cousin as she does, Evelyn has no wish to marry him and also believes she deserves to have been disinherited because of her behavior. Doing the right thing is important to Evelyn, even at this late stage in the game, and she repeatedly turns down her cousin's proposals. He is not deterred. He manages to secure a boat and follows Amelia and Evelyn up the Nile to Armana, where the Emerson brothers are excavating. Radcliffe, the older of the two brothers is in dire need of medical attention, and Amelia, having earned the name "Sitt Hakim," meaning lady doctor, from the Egyptians, gathers her medical supplies and hikes across miles of desert to the archaeological dig.

At the site, Amelia finds Emerson (as he prefers to be called) incoherent with fever. She nurses him until his fever breaks and she is certain he will live. During the time of his convalescence, she and Evelyn decide to stay and lend a hand with the excavation. Evelyn is pleased with this arrangement because she has developed an instantaneous fondness for Walter, the younger of the Emerson brothers, which he reciprocates with interest. Lucas is not to be forgotten. He arrives in Amarna shortly after the two women to find the four explorers embroiled in a situation of animated mummies haunting the night and the villagers terrorized to the point of refusing to work, despite their abject poverty. The story becomes more complex as they are unable to determine why the mummy is haunting them. Emerson and Peabody both believe that the mummy wishes for them to stop excavating there, until it becomes totally clear that the mummy is after Evelyn.

A trap set for the resurrected mummy results in Emerson and Amelia declaring their love for one another, just in case they do not survive the event. Walter has declared his love for Evelyn, which is reciprocated because Walter does not consider her name besmirched. They manage to apprehend the criminals, which are Lucas and the drawing instructor, who had initially seduced Evelyn, and take them to Cairo. Two years later Emerson and Peabody are married and expecting their first child. Walter and Evelyn are similarly married and are expecting their second child. The description of late 1800's Egypt give the country all the attributes of being an actual character itself. The love Elizabeth Peters obviously has for the country comes through in the beautiful descriptions of the arid and historic land. The tales of Amelia Peabody continue in a series that covers one of the most exciting periods of Egyptian Archeology.

Crocodile on the Sandbank from BookRags. (c)2022 BookRags, Inc. All rights reserved.