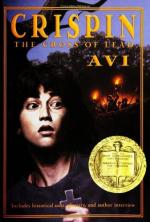 Avi (author)
This Study Guide consists of approximately 54 pages of chapter summaries, quotes, character analysis, themes, and more - everything you need to sharpen your knowledge of Crispin.

Crispin: The Cross of Lead Summary & Study Guide includes comprehensive information and analysis to help you understand the book. This study guide contains the following sections:

This detailed literature summary also contains Topics for Discussion and a Free Quiz on Crispin: The Cross of Lead by Avi (author).

This story is set in England in the Middle Ages in the year 1377. It is about a young boy called Crispin, who is declared a fugitive by the steward of his village. He runs away and is hunted by the steward and his men. He meets a friend called Bear and travels with him to the city, where he learns the truth about himself and manages to win his freedom.

Crispin is a thirteen-year-old boy who lives with his mother in the small village of Stromford, which is part of Lord Furnival's land. He has no father and is known simply as "Asta's son." When his mother dies, he is so upset that he runs into the woods. There he accidentally overhears a stranger and John Aycliffe the village steward discussing "a great danger." They see Crispin and attempt to kill him, but he runs away. Crispin goes to the village priest and finds out that he has been declared a "wolf's head", which means that anyone can kill him as if he is a wild animal. The priest gives Crispin a cross of lead that his mother owned. He tells Crispin that his mother could read and write, and that she wrote the words on the cross. He then tells Crispin that he must flee the village and head for a city. He will meet Crispin that night and give him more information about his father and mother. Crispin takes this advice, but as he flees the village he sees the body of the priest. He has been murdered.

Crispin wanders alone until he comes to an abandoned village. Here he meets a man called Bear, who makes Crispin his servant. At first Crispin is angry with Bear, but he soon warms to him. As they travel, Bear teaches Crispin how to play music to accompany him while he juggles. Together they can earn a living performing in the villages they pass through. Crispin gains more confidence in himself, and Bear makes him his apprentice rather than his servant. At the village of Lodgecot, they hear that Crispin has been accused of the murder of the priest in Stromford. A one-eyed man takes a dislike to Bear and begins to stare at Crispin too closely.

When they reach the city of Great Wexly, they stay at the Green Man tavern where Bear knows the owner, a woman called Widow Daventry. Bear tells Crispin to stay in their room, but he decides to explore the city instead. In the cathedral, he is seen by the steward, John Aycliffe. He is chased through the city, manages to lose the men, but gets lost in the winding streets. Finally Bear finds him and brings him back to the tavern. There Bear meets a man called John Ball and discusses the possibility of rebellion with him. Crispin knows they are putting themselves in great danger simply by talking about such things.

The next day Bear leaves to attend a secret meeting of rebels led by John Ball. Crispin sees the one-eyed man from Lodgecot follow Bear, so decides to follow too in order to warn Bear. Crispin eavesdrops on the secret meeting, then sees soldiers approaching and runs in to warn the rebels. The others manage to get away, but Bear is captured. He is taken to the Furnival palace by John Aycliffe. Crispin runs back to his room in the Green Man tavern. Soldiers come searching for him, but he hides in the secret hiding place in his room. Widow Daventry then reads the words on his cross and tells him the truth about who he really is. He is actually the son of Lord Furnival, and his mother is the daughter of Lord Douglas. He has noble blood, and could even try to claim his father's land and fortune now that Lord Furnival is dead. However, Lady Furnival wants to hold on to all her husband's money. John Aycliffe, who is her relative, is trying to kill Crispin so that he cannot claim his right as heir. They captured Bear in order to lure Crispin to them.

That night, Crispin visits John Ball and the rebels to tell them what has happened to Bear. None of them will help him, so he decides to try to rescue Bear on his own. He climbs the wall of the Furnival palace and swings onto the balcony of the second floor. Inside, he finds a dagger and searches for Bear. He comes to a chapel and starts to pray, but John Aycliffe comes in and sees him. Crispin tells John Aycliffe that he will not claim himself heir if John will let Bear go. He shows John his cross of lead and promises to give it to him. John Aycliffe vows that he will let Crispin and Bear leave safely.

Crispin is taken to the dungeon where he helps Bear up. They are led to the city gate, but John Aycliffe breaks his vow and demands that Crispin be killed. John Aycliffe and Bear fight, and Bear manages to throw him onto the soldiers' spears. John is killed. Bear threatens the rest of the guards, who stand back to let them pass. Crispin throws his cross on John Aycliffe's body, rejecting his noble blood and his connection to the Furnivals. He leaves the city with Bear, free and happy.

More summaries and resources for teaching or studying Crispin: The Cross of Lead.

Crispin: The Cross of Lead from BookRags. (c)2022 BookRags, Inc. All rights reserved.