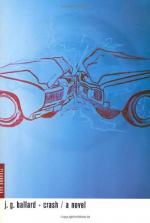 J. G. Ballard
This Study Guide consists of approximately 27 pages of chapter summaries, quotes, character analysis, themes, and more - everything you need to sharpen your knowledge of Crash.

This detailed literature summary also contains Topics for Discussion and a Free Quiz on Crash by J. G. Ballard.

Crash is a novel by English author J.G. Ballard. Crash is told through the eyes of James Ballard, a young man who becomes acquainted with a man obsessed with car crashes after Ballard experiences a crash of his own. Ballard looks up to this obsessed man and follows him as he chases after one car crash to the next. Ballard has become obsessed himself, allowing all aspects of his own car crash influence everything in his life from his marriage, to his extramarital affairs, to his expectations in regards to his own mortality. As the behavior of his new friend escalates, Ballard goes along for the ride, anxious to feel as alive as he does near a car crash. Crash is a unique novel that explores the effects of modern technology on human relationships, leaving the reader breathless and wondering just how far these characters will go.

James Ballard has arrived at the scene of a car crash at London Airport. The crash was caused when a man drove his car over the edge of a flyover onto a bus passing below. Ballard knows the intended target was the young actress in the car ahead of the bus, an actress who is now watching the emergency vehicles administer to the injured. The driver of the car is Dr. Robert Vaughan, an acquaintance of Ballard's who planned to die this day along with the American actress Elizabeth Taylor.

Ballard met Vaughan several months before after he experienced an accident of his own. Driving home from an encounter with his mistress, Ballard loses control of his car and ends up driving the wrong way up a flyover. Ballard's car misses two oncoming cars, but cannot get out of the way of a third. A woman and her husband are in the other car; the man does not survive. Ballard recuperates in the hospital for several days where he discovers his once aloof and disinterested wife has suddenly found new interest in him.

After returning home after the accident, Ballard begins to notice how large a part of the city roads and cars have become. Ballard begins to believe that all of humanity is destined to die in one large car accident. With this in mind, Ballard returns to work and begins renting every car the studio lot where he works has to offer. Ballard drives obsessively now, returning to the scene of his accident on multiple occasions. Ballard also thinks often of the widow who survived the car crash along with him. When they meet again after the inquest investigating the accident, she and Ballard begin an affair. After a short time, Ballard comes to recognize that he and his new lover, Helen Remington, only make love in his car. Ballard believes this is because their connection is the car and it is the car and the tragedy that took place that excites them.

Several times Ballard sees a man hanging around Helen or the places where they go. One night, Ballard takes Helen to a stock car show where a stunt driver reenacts a car accident. At this show, Ballard and Helen run into this strange man whom Ballard learns is Dr. Robert Vaughan, a television personality who has become a crash obsessive. Helen and Ballard go with Vaughan to take the stunt man to the hospital and later to the stunt man's home. It is in this man's home that Vaughan shows Ballard a photo album he has created filled with pictures of accident victims, Ballard included.

Vaughan and Ballard begin spending time together. Helen works for an accident prevention group and invites the two of them to watch a staged accident. Ballard notices Vaughan's sexual reaction to the accident and he becomes attracted to Vaughan. Ballard and Vaughan begin spending their days together searching the highways for car crashes. Every time they see an accident, Vaughan leaves Ballard at the car while he goes to take pictures of the victims. When not studying car crashes, Vaughan and Ballard will pick up women and Vaughan will make love to them in the back seat while Ballard drives. One night the woman is Ballard's wife.

When Vaughan visits Ballard at his office on a movie set he becomes aware that Elizabeth Taylor is making a film on the same set. One day Ballard and Vaughan watch as Elizabeth Taylor films a scene in which her character has just become the victim of a car crash. Vaughan is excited by this scene and begins to plot a crash in which he and Elizabeth Taylor will die together. As Vaughan is planning this crash, his stunt driver friend is killed in an accident in which he purposely ran his car into a car belonging to a young actress.

Vaughan and Ballard meet one night and take illegal drugs. The two men drive around for a while and finally stop outside a junk yard and spend the night making love. The following morning Vaughan wakes to find Ballard outside the car. Vaughan attempts to run Ballard over. During the next few weeks, Vaughan begins following Ballard's wife in his car and attempting to cause a car crash. A short time later, Ballard and his wife learn that Vaughan is wanted for running down a pedestrian at the airport. It is about this time that Vaughan steals Ballard's car.

Using Ballard's car, Vaughan runs his car off the flyover at the airport and kills himself when he lands on a bus full of airline passengers rather than the limo carrying Elizabeth Taylor as he had hoped. Ballard and his wife intend to buy a new car and continue hunting down car crashes as they wait for the one that will kill them both.

More summaries and resources for teaching or studying Crash.