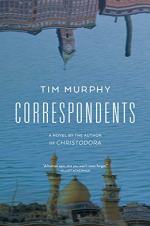 This detailed literature summary also contains Quotes and a Free Quiz on Correspondents by Tim Murphy.

The following version of this book was used to create the guide: Murphy, Tim. Correspondents. Grove Press, 2019.

Correspondents tells the story of two families – one Iraqi and one American – whose lives intersect during the war in Iraq and then in the United States. The novel focuses on the stories of Rita Khoury, a Lebanese American journalist who goes to Iraq to cover the war and Nabil al-Jumaili, a gay Iraqi man who becomes Rita’s translator and then emigrates to the United States. During the course of the novel, Nabil loses his cousin to sectarian violence in Iraq and faces discrimination in Syria because of his sexual orientation. Rita loses her job at a major newspaper after she states her true feelings about the American invasion of Iraq. After she returns home, a deranged white supremist shoots her sister at a Lebanese festival because he believes they are Muslims. By the end of the novel, Rita and Nabil reunite and begin to heal from the trauma they have suffered.

The novel begins with a prologue set at the Mahrajan, a Lebanese cultural festival, on Labor Day weekend in 2008. Murphy gives readers a glimpse of Rita’s life once she has returned home from Iraq and foreshadows the shooting that occurs later in the novel. Then the novel takes up with the Khoury family history, which begins in 1912 when two male members of the family decided to leave Lebanon for the United States. Rita’s father, George, became a doctor and married Mary Jo, an Irish nurse. Rita, who has an older sister named Allison, grows up close with her cousin Bobby, who joins the military after 9/11.

Readers meet Nabil in Part Two living in Saddam’s Iraq and attempting to hide the fact that he is gay. Although Nabil studies English with his cousin Asmaa, he works in a store and feels bored. Asmaa, who works in translation for the Iraqi government, makes a deal with American contractors to become a translator. She ends up taking Nabil with her to work for the American Standard, the same paper Rita works for. Asmaa translates for Rick Garza, the bureau chief, while Nabil translates for Rita. After the American invasion, Iraqi life changes drastically and the country plummets into chaos. The group of Americans and Iraqis covering the war for the Standard survive many ordeals as the situation in the country gets progressively worse. Finally, they are unable to leave the paper’s villa to report. Rita gets drunk one night and writes an email to her Palestinian boyfriend in Lebanon that explains how terrible the situation has become in Iraq and blames the Bush Administration. Rita’s boyfriend shares the email publicly with a popular blog. Rita’s name as a journalist is discredited and, as a result, she loses her job and the paper sends her home. Back at home, Rita gets a new job as a foreign affairs analyst.

Nabil stays in Iraq for a time, but the situation for Iraqis working with Americans has become extremely dangerous. Kidnappers take and then kill the paper’s driver, Ali. Then they shoot Asmaa as the paper is trying to get Asmaa and Nabil to the protected villa. Nabil flees Iraq to join his family, who have already left for Syria. In Syria he begins an affair with a Danish student, but soon the secret police find him out and try to extort him. Nabil flees again, this time to Lebanon, where he begins the formal process of applying for refugee status and emigrating to the United States. Nabil writes to Rita for help with his refugee application, but she never responds.

Meanwhile, back at home, Rita has fallen in love with a Jewish lawyer named Jonah and decides to take him to the Mahrajan. While they are there, a white supremist with mental health issues shoots Rita’s sister Allison and Jonah, her boyfriend. Bobby jumps on the gunman and saves everyone else at the festival. In the aftermath, Rita tries to return to work, but ends up moving back home to care for her young niece and nephew. She learns Nabil has made it to the United States and finds the email in which he asked her for help. She feels guilty. At the end of the novel, Rita travels to San Diego to reunite with Nabil, who has become a journalist for the Union-Tribune and is dating an older man in the Marine Corps. In the last scene of the novel, they swim in the ocean together.