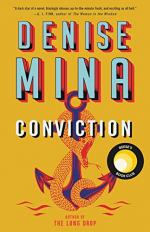 Denise Mina
This Study Guide consists of approximately 77 pages of chapter summaries, quotes, character analysis, themes, and more - everything you need to sharpen your knowledge of Conviction.

This detailed literature summary also contains Quotes and a Free Quiz on Conviction by Denise Mina.

The following version of the novel was used to create this study guide: Mina, Denise. Conviction. Little, Brown and Company, June 18, 2019. Kindle.

In the suspense novel Conviction by Denise Mina, when Sophie Bukaran realized she was in danger of being killed after a failed rape trial, she changed her name and made a new life for herself. She has lived for years as Anna McDonald, with a partner and two daughters who know nothing of her past. When Anna’s picture was taken with musician Fin Cohen and posted to Twitter, Anna was recognized by the men from her past. As Anna considered how to protect her daughters and herself from the cruel and greedy people who wanted her story silenced, she considered confronting Gretchen Teigler, the creator of her misery, but decided that would be foolish.

Making matters worse, Hamish, the father of Anna’s children, and Estelle, her best friend, announced they were having an affair. Anna was to move out of the house while her daughters went on a week-long vacation with Hamish and Estelle. Instead, when Fin, Estelle’s husband, came to Anna’s house to check on her, Anna took them both on a drive to revisit her past.

Just before Anna learned Hamish was leaving her, she had begun listening to a new podcast. She learned the podcast was about the death of Leon Parker, a man she had met while she worked at a luxury resort one summer. Trina Keany, the narrator of the podcast set forth the argument that Amila Fabricase, who had been found guilty of the murders of Leon and his two children, could not have killed them because she was on a plane headed home when the three died. Trina argued that Leon had killed himself and his children. Based on what Anna knew about Leon, Anna did not believe that Leon would have committed that sort of murder.

When Anna finally told Fin the truth about the podcast to which they had been listening as they drove, Fin insisted they should try to investigate the murders. He was particularly intrigued when he saw a picture of Leon and his children on the boat and realized that it proved there was a fourth person on the boat on which Leon and his family died. Anna, however, does not tell Fin right away that she is connected to the case. She believes that Gretchen, the same woman who ordered a hit on her because Anna told the truth about her rape, manipulated the investigation into Leon’s death.

By this time, the picture of Anna and Fin has appeared on Twitter and Anna knows the men who originally tried to kill her are after her. She and Fin have a close call with death when they visit Skibo Castle, the resort where Anna once worked to question her former boss about Leon. Anna began at that point to try to make Fin understand what sort of danger he would be in if he stayed with Anna. She considered abandoning Fin to keep him from being hurt but situations, like a second murder attempt at the airport as Fin and Anna tried to escape, kept pushing them together.

Even though Anna believed it was a bad idea, Fin began broadcasting what was happening to them in a podcast on Twitter. Because Fin was famous, the two were followed by thousands of supporters. Anna argued that the podcasts gave away their locations and what they were doing to their enemies, but soon learned that Fin’s supporters were loyal. People protected them and answered their questions simply because of the admiration they had for Fin.

The true danger of the situation Anna and Fin were in was brought home when they visited Julia Parker, the mother of Violetta, in Venice. Julia answered their questions about her daughter and the circumstances of her death. She also told them that when Violetta’s luggage was returned after she died, none of the clothes in the suitcase were the right size. Anna and Fin tried to visit Julia again later that night to get permission to use a recording of her voice in the podcast, but Julia had been murdered. Anna believed her murder was connected to their visit.

Anna decided at that point to confront Gretchen. She and Fin traveled to Paris and arranged a meeting. Inside Gretchen’s home, Anna correctly accused Gretchen of planning the murders of Leon and his family when she learned that Leon was broke. Anna had also deducted that Violetta had survived the sinking of the Dana and had taken the identity of Gretchen’s personal secretary, Dauphine. Anna accused Violetta of having murdered her mother, and of having plans to murder Gretchen so that she could inherit her fortune. At this point, Gretchen called forward an assassin to kill Anna.

Gretchen was not aware that Fin was live streaming the meeting with Gretchen and Violetta to Twitter. The feed was being watched by millions of followers, including the police, who had gathered at Gretchen’s house after the podcast began because they recognized the assassin as a wanted man. Anna and Fin were saved but Gretchen and Violetta were arrested for their conspiracy to kill. Anna concludes her book that because all of her money was spent on the adventure with Fin, she had to write this book to support herself.

More summaries and resources for teaching or studying Conviction.