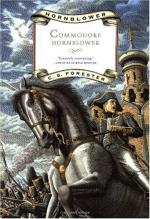 Smallbridge, in Kent, is a town over which Hornblower is the squire and in which the Hornblower family makes its normal residence. It has a green park, beyond which are the downs. The park borders a church with a tower and an orchard—all owned by Hornblower but worked by tenants. The Hornblowers' personal house is centrally located and staffed by John, a footman, Wiggins, a butler, and Brown, a servant—when he is not at sea with Hornblower. The novel begins in Smallbridge and concludes as Hornblower again descends into the town.

The Admiralty, in London, refers both to a building housing the leaders of the Royal Navy as well as the leaders themselves. Hornblower's superior officers are members of the Admiralty and it is from them he derives his orders as well as to them he tenders his results. If the...