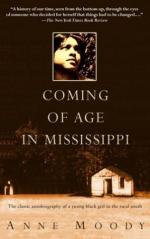 Anne Moody
This Study Guide consists of approximately 91 pages of chapter summaries, quotes, character analysis, themes, and more - everything you need to sharpen your knowledge of Coming of Age in Mississippi.

Mr. Death: Four Stories (1975) is Moody's only other published work.

Richard Wright's autobiography Black Boy (1945) uses fictional and novelistic techniques to describe Wright's youth in Mississippi and Tennessee. It is widely considered to be one of his finest works.

Albert French's novel Billy (1995) takes place in rural Mississippi in the 1930s. When ten-year-old Billy accidentally kills a white teenager, he is placed on trial in a courtroom that shows the degree of racism and injustice prevalent in the South at that time.

Lay Bare the Heart: An Autobiography of the Civil Rights (1985) is James Farmer's award-winning contribution to literature of the civil rights movement. Farmer, who founded CORE in 1942, conveys the struggle that he and other civil rights leaders went through to achieve their important goals.

I've Got the Light of Freedom: The Organizing Tradition and the Mississippi Freedom Struggle...

More summaries and resources for teaching or studying Coming of Age in Mississippi.

Coming of Age in Mississippi from Gale. ©2005-2006 Thomson Gale, a part of the Thomson Corporation. All rights reserved.