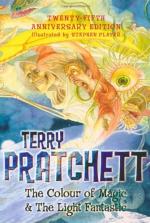 The Colour of Magic Setting & Symbolism

The Luggage is Twoflower's valise that walks on legs and appears capable of reason. It is made of sapient pearwood, a rare magical material. The Luggage is fiercely loyal to its owner and will attack if its contents are under threat of theft, or if its owner is in danger.

Kring is the magic black sword owned by Hrun. It is made from a thunderbolt and carved with ancient runes. While the sword fights well, it is also an arrogant braggart that talks too much. It is Kring that helps Rincewind become a hero.

Ankh-Morpork is the oldest city in Discworld.

Great A'Tuin is the turtle upon whose back Discworld rests .

The Circle Sea is the main waterway in Discworld.

Discworld is an alternate universe with a flat, round shape. It is carried on the back of Great A'Tuin...

The Colour of Magic from BookRags. (c)2022 BookRags, Inc. All rights reserved.