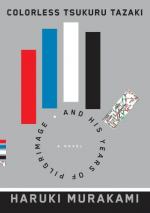 Haruki Murakami
This Study Guide consists of approximately 46 pages of chapter summaries, quotes, character analysis, themes, and more - everything you need to sharpen your knowledge of Colorless Tsukuru Tazaki and His Years of Pilgrimage.

Colorless Tsukuru Tazaki and His Years of Pilgrimage Summary & Study Guide includes comprehensive information and analysis to help you understand the book. This study guide contains the following sections:

This detailed literature summary also contains Quotes and a Free Quiz on Colorless Tsukuru Tazaki and His Years of Pilgrimage by Haruki Murakami.

Tsukuru Tazaki had four very close friends while he was in high school. There were two boys named Oumi and Akamatsu, and two girls named Shirone and Kurono. Their nicknames were Ao, Aka, Shiro, and Kuro. Each had a color in their name and Tsukuru was the only member of the group who didn't. He felt this was significant and that he was really the only member of the group who was a colorless person. His friends didn't really feel that way, but Tsukuru didn't know that for many years.

When it was time for the group to go to college, Tsukuru was the only one who decided to go away to school. He had chosen a specific engineering program focusing on train stations. The program was in Tokyo and Tsukuru moved to the city to attend that program. He returned home to visit his friends as often as possible and they always welcomed him back without reservation. Then, he made a trip home and found that none of his friends were taking his calls. When he finally talked to one of them, Tsukuru was told he was no longer a part of the group and that he should stop trying to contact them.

Tsukuru was heartbroken and almost died over the coming months as he struggled to come to terms with his life without the comfort of his group of friends. He did recover and eventually became an engineer, as he'd planned. He became close friends with another young college student, but that man disappeared from Tsukuru's life without giving any explanation.

Years passed. He had a few casual relationships with women but never allowed anything to become too serious until he meets a professional woman named Sara. He's attracted right away and realizes he wants to spend more time with her. One night, they are about to have sex but Tsukuru is unable to perform. Sara is understanding but says she believes Tsukuru needs to confront his past in order to get on with his future.

Tsukuru realizes Sara is right and she helps him track down the four who had hurt him so badly. She tells him that Ao is working in their home town as a salesman at a Lexus dealership. Aka has started a successful business mentoring employees and corporations. Kuro has married, has two children, and lives in Finland. Shiro has died.

Tsukuru visits Ao and Aka and learns that Shiro accused him of raping her, prompting the group to decide that they will ostracize Tsukuru. Both Ao and Aka say they didn't really believe Shiro's claim, but that Kuro had sided with Shiro, convincing them. Tsukuru reads newspaper accounts of Shiro's death. She was strangled to death and there was no sign of robbery or sexual assault. The murder is never solved.

Next, Tsukuru goes to visit Kuro. Kuro reveals that she never believed Shiro's claim that Tsukuru raped her. Kuro says she liked Tsukuru when they were kids and believes Shiro might have been jealous. She also says Shiro had mental issues. Kuro felt obligated to support Shiro, trying to save her from killing herself. Kuro eventually left Japan, partly to get away from Shiro.

With this information, Tsukuru returns home and realizes that he wants to ask Sara to marry. He contacts her but reveals that he knows she's been seeing someone else. He then fears that he might lose her by pushing her to make a decision. She says she'll give him an answer in three days and the story ends with him waiting for his next meeting with Sara.

More summaries and resources for teaching or studying Colorless Tsukuru Tazaki and His Years of Pilgrimage.

Colorless Tsukuru Tazaki and His Years of Pilgrimage from BookRags. (c)2022 BookRags, Inc. All rights reserved.