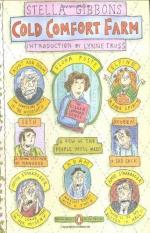 This detailed literature summary also contains Topics for Discussion and a Free Quiz on Cold Comfort Farm by Stella Gibbons.

Set primarily in Sussex, England, circa 1930s, Cold Comfort Farm is a parody of late eighteenth/early nineteenth century agricultural literature, such as novels by D.H. Lawrence and Thomas Hardy. The main character, Flora Poste, is reminiscent of Jane Austen and Bronte heroines in many regards. Orphaned and broke at nineteen, she decides to live with relatives she has never met on a farm in Sussex. She discovers the Starkadders of Cold Comfort Farm are in a bad state as the farm is supposedly cursed and tightly controlled by the matriarch, Aunt Ada Doom, who never leaves her room. There is a general sense of depression and gloom, the very farm appearing like "a beast about to spring."

Abhorring messes similar to Jane Austen's Emma, Flora takes on the challenge to tidy up Cold Comfort Farm and everyone on it. The Starkadders believe they must never leave the farm or Aunt Ada Doom will have one of her fits of madness, but Flora can see the madness as a little too convenient. This madness supposedly is the result of something Aunt Ada saw in the woodshed when she was a child. Flora tackles each family member individually, despite Aunt Ada's distress: she changes her cousin Elfine from an artsy woodland sprite into a lady eligible for marriage to the wealthy man she loves; she helps her cousin Seth find a career in the talkies, his passion, through her Hollywood producer friend; she encourages religiously fanatic Uncle Amos to go on a preaching tour, getting him off the farm so her cousin Reuben can take it over as this is his greatest wish; and she sends her depressing Aunt Judith into therapy and off to explore European churches. Flora's biggest problem is Aunt Ada Doom, but the farm will never really be tidy as long as she is brooding in her room. Flora spends a day with her, managing to convince her there is a lot more fun to be had for a lady of wealth than being cooped up in a bedroom. Aunt Ada agrees and flies off to Paris on Elfine's wedding day. After all Flora's meddling has come to fruition and the farm is tidied up, Flora seeks her own happy ending. Like a fairytale, Charles, the man she loves, comes to pick her up in his airplane and they declare life-long love toward one another as they return to London.

There are a number of subplots that also take place. A writer staying in the nearest town, Mr. Mybug, develops a crush on Flora, but as he's rather fat and she doesn't care much for intellectuals, she does her best to avoid him. Fortunately, he meets one of the Starkadder women and marries her instead. The hired girl, Meriam, is another major subplot. She gets pregnant every spring when the "sukebind" blooms and has just had her fourth child by an unknown man. Flora teaches her about birth control which Meriam thinks is flying in the face of nature, but which her mother, Mrs. Beetle, condones. Meriam ends up marrying one of the farmhands.

The novel is best enjoyed by understanding it as a parody on rural literature and character archetypes as the story builds on a conventional structure toward a satisfying ending.