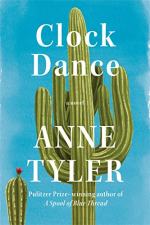 Anne Tyler
This Study Guide consists of approximately 72 pages of chapter summaries, quotes, character analysis, themes, and more - everything you need to sharpen your knowledge of Clock Dance.

In 1967, a ten-year-old Willa and her friend Sonya try to sell candy bars in order to afford an orchestra trip. However, when they approach the first home, both girls are too nervous to talk to the potential customer and leave. At home, Willa learns that her mother has left the house again, and implies that she has done this many times before. Her father makes them grilled cheese sandwiches and tells the girls their mother will be back when she is ready. The next day, however, their mother still has not returned and the girls are forced to go to school on their own. After school, the two try to make pudding for their father, but Willa gets made when he tells her she read the recipe wrong. When their mother returns in the morning, both she and Willa’s father act as if nothing happened. This bothers Willa, who no longer gives her mother sympathy when she tries to apologize for abusing or leaving Willa and her sister Elaine.

In 1977, Willa and her boyfriend Derek are flying to Willa’s home to meet her parents. Willa, who always takes a bus back from school, has never flown before. Before they get on the plane, Derek announces that he wants to marry Willa and is going to ask her parents for permission. Willa is hesitant to accept this proposal, as Derek wants to move to California with her in three months and Willa wants to finish her degree in Illinois. On the plane, the man sitting beside Willa presses something against her and proclaims he has a gun. When Derek swaps seats with her, Willa is thrilled as she believes he saw what the man was doing. However, once they get off the plane, Derek does not believe her story which angers Willa. Willa’s parents pick them up and she tells her mother what happened on the plane. However, Derek respectfully talks to her parents and deescalates her mother’s anger. At home, Willa learns that Elaine is avoiding her parents and has no interest in talking to Willa. When Willa’s parents take her and Derek out for dinner, her father praises her mother for her performance in a play where she took the stage from the crippled main character. Just before Derek and Willa leave, Derek tells Willa’s parents that he wants to marry her. Willa’s mother goes on a tirade, but Derek stands up to her. Angry, Willa announces she is going to marry Derek no matter what her mother says, and they leave together.

In 1997, Willa and her husband Derek are heading to a sports party. Willa, however, wishes she could stay home as her 16-year old son Ian is considering dropping out of high school. However, when Derek gets angry at another driver for driving poorly, he pulls in front of the driver and causes an accident that kills Derek himself. While Willa freely admits that the accident is Derek’s fault, she struggles to move on even after the funeral. Her father tells her to live life by the moment like he has after her mother died over a decade prior. However, Willa finds this difficult, especially after Sean moves out. She decides to finish the degree that was put on hold because of her marriage. When she meets the driver of the other car, Carl, they connect right away, but Willa refuses to go out with him as she believes she will never find a man who loves her like Derek did.

In 2017, Willa receives a call from a woman named Callie in Baltimore. Callie says that Willa’s daughter-in-law, Denise, has been shot and she needs help taking care of Denise’s daughter, Cheryl. This surprises Willa, as Sean never married and is no longer dating Denise. However, she decides to go to Baltimore anyway as she is bored in Arizona and wants meaning in her life. Her husband Peter demands to go with her as Willa has not traveled on her own in many decades.

In Baltimore, they meet Callie who is embarrassed that she called Willa as Denise informed her Willa is not actually Cheryl’s grandmother. However, it is clear that Callie does not want to take care of nine-year-old Cheryl. Willa, Peter, Cheryl, and Cheryl’s dog Airplane all head back to Denise’s house, where Willa connects with Cheryl. They meet Denise at the hospital the next day, where she says she did not recognize the shooter nor does she have any idea who may have done it. She tells Willa that Sean walked out on her one morning and moved into a new apartment with her married best friend Elissa. The nurse comes in and tells Denise that she is lucky she only has a broken leg. When they leave the hospital, Willa calls Sean but he hangs up on her after promising to meet her for dinner on Monday.

After a few days of baking with Cheryl and cooking with Peter, some of Denise’s neighbors stop by to see how Cheryl is doing. One of these neighbors, named Ben, works as a doctor next door in a clinic he runs in his own home. Peter becomes more distant as he believes Cheryl has plenty of help with the neighbors and wants to go home. When Denise starts physical therapy at the end of the week, Cheryl, Peter, and Willa go to the hospital where they meet some of her coworkers from Cheryl’s school. A few days later, after taking Denise home, Elissa’s former husband Hal, the next door neighbor Erland and his step-father Sergio who everybody calls Sir Joe all come over to help Denise into her home. Peter panics when he learns that she will not be able to walk on her own for a few weeks, but Willa is excited to stay. Peter calls their travel agent against Willa’s wishes and schedules a flight for Sunday, the day before they were supposed to meet Sean.

As the days go by, Willa decides to stay with Denise and Cheryl while Peter goes home by himself. While he is upset with this idea, he leaves quietly without her. Willa meets Sean and Elissa as planned. They tell Willa that they had planned to tell both Denise and Hal over dinner one night, but things turned chaotic after Denise burned the meat. However, neither Hal or Elissa have told their in-laws that they are no longer together which angers Sean. As they leave, Sean does not give Willa any straight answers to any of her questions, but he does mention that Ian is coming to visit. This troubles Willa, as Ian has claimed he could not leave his work in the wilderness to come and see her. However, she is content to return home with Denise and Cheryl.

As Denise becomes more independent, Willa realizes she will have to leave soon but keeps Denise’s progress a secret from Peter. Cheryl is sad that Willa will not be around in five weeks when she starts school again. One day, Erland visits Willa and ends up confessing that he shot Denise by accident after his friend – a delinquent named Marcus – tried to steal Sir Joe’s gun. Furthermore, Cheryl saw what happened but kept quiet as she does not want Sir Joe or Erland to get in trouble. Willa convinces him to talk to Sir Joe, even though Erland is worried he will be sent to foster care as he does not believe Sir Joe wants him in the house at all. When they confront Sir Joe, however, he admits that he does not technically have a license to carry the gun and agrees to keep Erland around.

As Peter begs for Willa to come home, she begins to feel bitter towards him and says she will come home when she is ready. However, this happens quicker than she expected when Denise learns from the mother of Cheryl’s friends about the shooting. Denise accuses Willa and Cheryl of maliciously meddling behind her back and calls Willa superficial. While Cheryl leaves to talk to her mother, Will makes reservations for a flight to take her back Monday morning. While Cheryl, Ben, and even Denise try to talk her out of it, she resolves to leave and goes to the airport. Once there, however, she receives a message from Peter who angrily tells her that he has his own life and she will have to find a cab to take her to their house on her own. On the way to Arizona, Willa thinks about her life and her love for Cheryl and Denise. As soon as she lands in Arizona, she finds a ticket booth and dreams of a new life where she can follow her dreams of teaching English and acting as a grandmother.

More summaries and resources for teaching or studying Clock Dance.