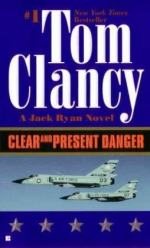 Jack Ryan was educated at Boston College and recruited to the CIA by Admiral Greer, who is at Bethesda Hospital mortally ill from pancreatic cancer. Ryan is designated to represent Admiral Greer in his absence. Ryan's area of expertise is the KGB and Central Europe.

Admiral Greer is something of a father figure to Ryan, replacing his own father who had died in a plane crash in Chicago, a person to whom Ryan has come many times for advice and guidance. Ryan has only been with the CIA for six years. Now at the age of forty he is delegated to replace his old boss Admiral Greer in one of the most important Intelligence positions in the US government.

Ryan has made his money in the brokerage business and does not need the salary he gets from the CIA. He has gotten himself a Ph D, written...