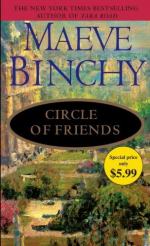 Maeve Binchy
This Study Guide consists of approximately 42 pages of chapter summaries, quotes, character analysis, themes, and more - everything you need to sharpen your knowledge of Circle of Friends.

This detailed literature summary also contains Quotes and a Free Quiz on Circle of Friends by Maeve Binchy.

Maeve Binchy’s novel Circle of Friends focuses on Benny Hogan and Eve Malone, two close friends who live in a small Irish village called Knockglen. Although they have grown up together, their circumstances are quite different. Benny is the beloved only child of overprotective parents while Eve’s parents died when she was an infant, and she has been raised by the loving nuns in the local Catholic convent. Both harbor some resentments – Benny toward her parents’ tendency to be overbearing and controlling, and Eve toward the Westwards, the influential family who disowned her mother when she married below her station and then abandoned Eve when she was orphaned.

When the girls finish school, both head for nearby Dublin, each under different circumstances. Benny’s parents have saved enough money to send her to the University College of Dublin, but they demand that she return home to Knockglen each night. Although Mother Francis, who heads the convent and loves Eve like a daughter, has made many attempts, there is not enough money to send Eve to college so it has been arranged for her to live at a Dublin convent while doing a secretarial course. Eve longs for a college education and the university experience, so she eventually swallows her pride and asks her cousin, Simon Westward, to pay for it and to her surprise, he agrees.

A freak accident on the first day of college takes the life of student Frank Hegarty and injures Eve, but it also brings the girls together with fellow students Nan Mahon and Jack Fogerty. Nan is stunningly beautiful and, encouraged by her mother, harbors plans to escape her modest home and alcoholic father by marrying well. Jack is the charming, handsome son of a local doctor. They form a close circle that includes several other students, and soon Benny, who is a large, somewhat gawky girl, attracts the attention of the sought-after Jack and begins a relationship with him. This development also surprises Sean Walsh, a smarmy young man who works in Benny’s father’s menswear shop and plans to inherit the business by marrying Benny, an idea that pleases her parents, who cannot envision a different future for her.

As the university life in Dublin converges with life in Knockglen, Nan meets Simon Westward, Eve’s cousin, and begins plotting a future, which includes having sex with him. What Nan does not realize is that despite outward appearances, the Westwards are no longer wealthy and while Simon is infatuated by her beauty, he is also shopping around for a wife who can bring a significant amount of money into the marriage. When Nan gets pregnant, she is shocked when Simon ends the relationship by giving her money for an abortion. In the meantime, Benny’s father dies suddenly, and she feels the need to spend more time in Knockglen, which frustrates Jack. Nan takes advantage of the situation and begins secretly seeing Jack, eventually telling him she is pregnant and implying the she was a virgin when they began sneaking around and sleeping together. He feels obligated to marry her, and they get engaged, breaking Benny’s heart and shocking all of their friends. At a party, Eve realizes what happened and confronts Nan, who falls into a glass door and is seriously injured. She recovers but miscarries. She and Jack end their relationship. Jack tries to reconcile with Benny, but she has now moved beyond her obsession with him and is able to see him simply as a member of their circle of friends.

More summaries and resources for teaching or studying Circle of Friends.