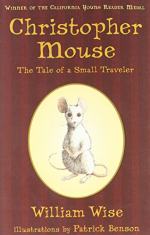 Christopher Mouse: The Tale of a Small Traveler Summary & Study Guide includes comprehensive information and analysis to help you understand the book. This study guide contains the following sections:

This detailed literature summary also contains Quotes and a Free Quiz on Christopher Mouse: The Tale of a Small Traveler by William Wise.

The following version of this book was used to create this study guide: Wise, William, Christopher Mouse: The Tale of A Small Traveler. Bloomsbury Publishing, 2006. Paperback.

Christopher Mouse's diary tells the story of a brief period in the little mouse's life. Christopher starts the story with his earliest memories with his mother and siblings in a cage at Mrs. Crimmins's place. Mrs. Crimmins breeds white mice for money. Christopher learns from his mother that Mrs. Criminal sells them to pet shops and medical laboratories. The best possible future is to go to a pet shop, according to his mother. Christopher's three brothers are sold to a medical laboratory, but he and his sister Anna are taken together to Pete's Pet Store. Unfortunately, they are not sold to the same family as pets.

Christopher's first owner is excellent. Freddy Willis takes great care of Christopher and provides him with the best food and living conditions. Unfortunately, Freddy's kind heart allows him to be tricked by a bully named Aubrey. Aubrey lies to Freddy when he says that his parents are going to be arrested for going bankrupt and that he is going to have to live in an orphanage. When he tells Freddy that he has never owned a pet before, Freddy decides to give him Christopher so he can have some joy in his otherwise sad life. When Aubrey takes Christopher home, the mouse sees that the boy lied about it all. Aubrey's father rewards him for tricking Freddy out of his pet. To make matters worse, Christopher learns that Aubrey has had a number of pets, and he traded all of them for better deals.

After Christopher is discovered by the family cat, Aubrey decides to take him to school to trade. The high bidder is a boy who wants to kill Christopher so he can practice taxidermy with him. Afraid for his life, Christopher escapes during a class field trip to a museum before the trade can take place. Life alone in the museum is not easy, as Christopher soon finds. The food and the water supply are limited. He is discovered in an office by two women named Cordelia and Amelia. They try to beat him to death with their umbrellas. After that, he almost gets stuck in a sink. After spending two nights in the museum, Christopher realizes that his freedom may just kill him. He decides to present himself to the next person he sees and hope for the best. He figures the worst that can happen is that they might kill him, but he knows he cannot live much longer in the museum.

Luckily, Walter and Abby are the next people Christopher sees. They realize he is a white mouse, probably someone's pet who got lost. They take him in and give him a great home. Their three children love him. Thinking he is sad when he really just has a cold, the family decides to get another mouse to keep Christopher company. When he hears that the mouse is a retread at Pete's Pet Store that was recently returned by a fickle girl, he has high hopes that he and his sister Anna will be reunited.

Christopher Mouse: The Tale of a Small Traveler from BookRags. (c)2022 BookRags, Inc. All rights reserved.