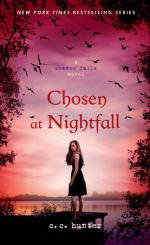 Kylie is having dinner with her grandfather and aunt, but her appetite disappears when a particularly aggressive ghost appears to her and asks her to kill someone. As Kylie struggles to hide her disgust from her grandfather, an alarm sounds throughout the compound.

Kylie and her aunt go to the barn with the other young chameleons. Kylie’s aunt turns them both invisible, a skill Kylie has only recently learned. As they wait, Kylie feels the animosity of her fellow students who blame her for the alarm because of her outsider status. Kylie’s grandfather comes to the barn and urges the chameleons to flee. Kylie hesitates, however, when she first senses and then sees her friend Derek, a fae, nearby. Derek is soon joined by Burnett James, the head of security from Shadow Falls. Kylie wants to become visible and...