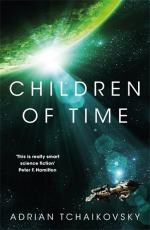 Adrian Tchaikovsky
This Study Guide consists of approximately 81 pages of chapter summaries, quotes, character analysis, themes, and more - everything you need to sharpen your knowledge of Children of Time.

Understanding represents the collective knowledge of a species over multiple generations of evolution. For the spiders, it is a valuable resource that shapes their entire culture even before they are aware of the nano virus within them. After the plague nearly wipes the spider’s out, it is discovered that Understanding is a commodity, allowing all spiders of every peer group, male or female, to learn whatever they want. Ironically, this same Understanding does not exist in humans, as both Kern and Guyen lament their inability to transfer knowledge to future generations. Eventually, the spider’s understanding and human intellect combine into one force benefiting both species.

Kern’s World, or the green planet as the humans refer to it, represents life and prosperity. It is a lush world housing millions of advanced species. However, it is also a potential haven for the...

More summaries and resources for teaching or studying Children of Time.