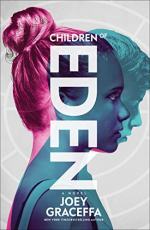 Joey Graceffa
This Study Guide consists of approximately 57 pages of chapter summaries, quotes, character analysis, themes, and more - everything you need to sharpen your knowledge of Children of Eden.

Children of Eden: A Nove Summary & Study Guide includes comprehensive information and analysis to help you understand the book. This study guide contains the following sections:

This detailed literature summary also contains Quotes and a Free Quiz on Children of Eden: A Nove by Joey Graceffa.

In Children of Eden, by Joey Graceffa, Rowan is a 16-year-old girl living in Eden. Eden is a self-sufficient city created by Aaron Al-Baz as a refuge when the Earth's ecosystem failed. Everyone in Eden believes the city is the only place on Earth that is still habitable by humans and that the rest of the world is a wasteland. Because the city has to support life for hundreds of years to come, the population is strictly limited. Under strict rules, couples are allowed to have one child, and second pregnancies are strictly forbidden. Pregnancies are terminated and children are taken by the authorities, never to be seen again.

All children are implanted with special lenses on their eyes that change the appearance of their eyes. The lenses identify the child as a first-born. Rowan and her brother, Ash, are twins. Their parents identify Ash as the older of the two, and he has the lenses. Without them, Rowan has spent her entire life behind the walls of her family home. She and Ash are very close. He is often ill, suffering from asthma. Though Ash has limited contact with others due to his illness, he is able to tell Rowan the minute details of his day, including his friendship with a girl named Lark. Rowan's parents are both high-ranking officials, and her father's attitude toward her is openly hostile.

Rowan's mother announces that they have managed to procure lenses for her. Rowan knows her parents have been working on this plan, but she is shocked and angry when her parents also discover she will be sent away to live with another couple. She will never be able to return home. She also learns that her father tried to abort her and that he is responsible for Ash's illness. Her anger sends her over the wall of the family compound, and she wanders through some of the inner circles of the city. She has a brush with one of the city's police, a Greenshirt, and ducks into a party where she meets Lark. Lark initially mistakes her for Ash, but is delighted to discover it is Rowan. She helps Rowan hide her identity on the way home and they go out together again the next night.

Rowan's mother does not know Rowan has been out when they leave for her lens implants. They are stopped by Greenshirts, and her mother tells Rowan how to reach the black-market clinic for the implants just before the Greenshirts shoot her. Rowan gets away and is chased by another Greenshirt, Rook, who is actually sympathetic to the second-born children and sends her to meet with Lachlan, Rook's younger brother. Lachlan introduces Rowan to an entire group of second-born children. Rowan learns that Aaron Al-Baz was responsible for millions of deaths. Rowan then discovers Ash has been taken into custody, turned in by her father. Rowan, Lark, and Lachlan rescue Ash. Rowan becomes separated and leaves the city's boundaries. She crosses a desert and finds life is flourishing outside the city walls. She believes the soldiers will stop pursuing her, but they capture her, making her aware they have always known the Earth is not a wasteland at all. She is unconscious during the trip back into the city but wakes in a prison where officials are trying to brainwash her her into believing she was hallucinating and that she never saw the trees, plants, and animals outside Eden.

More summaries and resources for teaching or studying Children of Eden: A Nove.

Children of Eden: A Nove from BookRags. (c)2022 BookRags, Inc. All rights reserved.