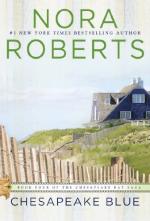 Nora Roberts
This Study Guide consists of approximately 49 pages of chapter summaries, quotes, character analysis, themes, and more - everything you need to sharpen your knowledge of Chesapeake Blue.

Chesapeake Blue by Nora Roberts is the fourth book in a series titled "The Chesapeake Bay Saga" that includes Sea Swept, Rising Tides, and Inner Harbor. This is a saga of the 'Quinn Brothers.' Seth Quinn is coming home. After spending an extended time in Europe, refining and expanding his craft, he was returning, having become a world-renowned artist. After five years away from home, he can hardly wait to return to the familiar warmth and love of the family that he would do anything for.

Almost immediately, he meets Dru (Drusilla) Whitcomb Banks, and before he can think about anything, he finds himself very attracted to her. It takes Seth some time to convince Dru that he isn't like the cheating loser of a fiance that she left behind in Washington, D.C., and in fact, is one of the few honest men left that are still available. He convinces her to pose for him in exchange for one of his paintings that she has fallen in love with. That leads to more time posing in exchange for framing and then yet another painting and framing joins the mix. Dru, surprising even herself, discovers that despite her best efforts, she can't help but feel the same way for Seth.

Seth brings home a dark secret, however. It is one that has the potential to tear his family apart and Seth simply won't allow it. His love for his family runs so deep that he will do anything he has to in order to keep the threat from affecting them. To that end, he pays a ransom in varying amounts to a woman he considers to be little more than a vessel and has been doing so since he was just fourteen years of age. The secret he keeps will affect those he loves regardless of his best efforts and when the whole story is revealed, Seth learns just how strong a family that binds together is. Seth finds out that the love he shares with Dru is not only a harbor for him, but it also gives him the strength to face down the enemy in his life. In a vicious attempt to ruin the life he's built for himself, his mother burns the family business, almost destroying it completely. Instead of getting the money she believes she deserves, Seth's mother is arrested. Seth does what he can to help and then takes over and installs a porch swing he bought for Dru. While they are giving it a test run, he asks her to marry him, giving her the ring that used to be his grandmother, Stella's. A single tear falls as he tells her that today is the first day of their future together.

More summaries and resources for teaching or studying Chesapeake Blue.