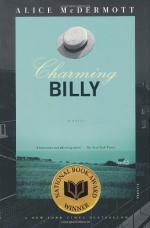 Dennis looses his faith when his wife dies. Everyone tells him to cry, that it is okay; everyone except his kids. Dennis's kids allowed him to grieve the way he wanted to, all of them eventually leaving him on his own to go live their own lives. Dennis's daughter asks him if he still struggles with his faith the night Billy is buried. Dennis tells her he believes everything now. His daughter is not sure whether or not he is lying.

This short chapter underscores the theme of family and the differences between the family of Dennis's generation and that of his daughter's generation. Dennis's aunts and uncles rallied around whenever a spouse would die, ready to do what it takes to help the widower through the lonely days ahead. Dennis's own children, however, run away and allow him to grieve...