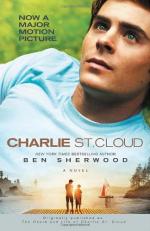 Ben Sherwood
This Study Guide consists of approximately 24 pages of chapter summaries, quotes, character analysis, themes, and more - everything you need to sharpen your knowledge of Charlie St. Cloud.

The Death and Life of Charlie St. Cloud is a novel by writer Ben Sherwood. Thirteen years ago, fifteen-year-old Charlie St. Cloud took his brother to a baseball game, using a car borrowed without permission. On the way home, a drunk truck driver crossed into Charlie's lane. Both Charlie and his brother were killed by the impact, but a dedicated paramedic was able to bring Charlie back, but not before Charlie made a promise that he would never leave his brother. Now Charlie's life is restricted to the boundaries of the Waterside Cemetery where he sees his brother every night at sundown. When Charlie meets Tess Carroll, the restrictions of his life become almost paralyzing until he realizes that sometimes you have to let go of what matters most. The Death and Life of Charlie St. Cloud is a beautiful portrait of grief and second chances that will haunt the reader long after the last page.

Charlie St. Cloud surprises his brother with tickets to see their beloved Red Sox play. Their neighbor is out of town and so they borrow her car without informing anyone of their plans. Both brothers have a wonderful time at the game, eating hotdogs and cheering their favorite team. On the way home, as they begin to cross a dangerous bridge that has been the scene of many accidents in the past, Sam distracts Charlie by telling him that the moon looks amazingly close to the earth on that particular night. Instead of watching the road, Charlie studies the moon, so that he does not notice the semi-truck wandering into their lane.

When paramedic Florio Ferrente arrives on the scene, he immediately goes to work cutting Charlie and Sam from their borrowed car. Both boys are seriously injured, neither with detectible heartbeat. In the ambulance, Florio works on Charlie first. As Florio works diligently, Charlie and Sam find themselves on a hill overlooking the harbor. Sam is scared, so Charlie promises him that they will always be together, that Charlie will never leave him. However, Florio shocks Charlie's heart as the boys begin to cross over, pulling him back to the world of the living. Shortly after Sam's funeral several days later, Charlie realizes that he has been given a gift, the ability to see his dead brother.

Thirteen years later, Charlie, who went to college and became a certified paramedic, works at Waterside Cemetery so that he might be able to see his brother each night at sundown. Charlie's life is very rigid, he can only travel far enough away that he can easily return by sundown. The few times Charlie has been late, his gift began to fade and he could not see Sam properly. For this reason, Charlie refuses to do anything that might keep him from seeing his brother every night.

Tess Carroll is a local girl who owns a sail manufacturing company. Tess is a sailor and plans to sail around the world in less than a week. Tess takes her boat out to test a new sail she and her workers have made specifically for the race. Tess purposely sails into a storm to test both her own skills and her boat. However, the storm proves to be more intense than Tess anticipated and she finds herself in real danger. The boat capsizes. All that Tess remembers is that she ends up at Waterside Cemetery visiting her father's grave.

Charlie meets Tess in the cemetery and invites her to dinner. Dinner is romantic and exciting, creating a new kind of bond unlike any they have ever had. However, the next morning Charlie learns that Tess's boat is lost at sea. Charlie realizes that Tess is only a spirit, one of many he has been capable of seeing since his accident. Charlie spends time with Tess, but is saddened when she disappears, leaving behind a note asking him to come find her. Charlie believes the only way he can find Tess is if he commits suicide. However, Charlie soon realizes that Tess's spirit was different from the others and that she might still be alive. Charlie heads up a search for Tess, missing his meeting with his brother for the first time.

Charlie and his companions are about to give up on the search for Tess when Sam, who has now crossed over, guides them with gusts of wind. Tess is found, injured and hypothermic, but alive. Tess remains in a coma for several months, but soon wakes with vague memories of Charlie. Tess makes a full recovery over time and she marries Charlie.

More summaries and resources for teaching or studying Charlie St. Cloud: A Novel.