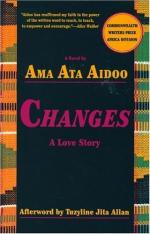 Ama Ata Aidoo
This Study Guide consists of approximately 48 pages of chapter summaries, quotes, character analysis, themes, and more - everything you need to sharpen your knowledge of Changes.

This detailed literature summary also contains Topics for Discussion and a Free Quiz on Changes: A Love Story by Ama Ata Aidoo.

"Changes: A Love Story" by Ama Ata Aidoo is a novel that explores the changes that working women in Africa must face in their marriages and families while men's lives remain unaltered. After Esi divorces Oko, she has more time to focus on her career, but after she remarries to Ali Kondey, she must find a balance between being a career woman, a wife, and a friend to Opokuya who encounters problems in her marriage of a different nature. "Changes: A Love Story" is a very interesting novel that is sure to keep the reader entertained.

Esi first meets Ali at Linga Hideaways while confirming arrangements for a business trip. Esi and Oko's argument leads to marital rape which causes Esi to leave her husband. Opokuya and Kubi argue about the use of their car. Ali's childhood changes with Mma. Danjuma's decision to have him properly educated. Opokuya runs into Esi at Hotel Twentieth Century and Esi explains that she has left Oko because his attentions were too suffocating. As they talk, they encounter Ali who is infatuated with Esi, despite being married to Fusena who he met in teacher training school.

Ali begins courting Esi who refuses to return to Oko and begins sleeping with Ali. After an extended absence, Ali returns to Esi and proposes, insisting that she wear his ring. After telling Opokuya about her engagement, Esi visits her mother who disapproves of Esi lowering her status by becoming a second wife. Fusena is angry that Ali plans to take a second wife who has an university degree.

Ali's first visit to Esi's village is unsuccessful since he brings no one from his family to sponsor him. Ali's people agree to sponsor him if Fusena consents to his second marriage, and after she reluctantly consents, Ali returns to Esi's village with his people. After Ali and Esi are married, he does not go to her house that night, which saddens Esi. Ali is torn between spending time with his two wives. When Ali and Oko fight at Esi's house on New Year's Eve, Esi flees to Opokuya's house with Ogyaanowa and that is where they spend the holidays. Halfway through the new year, Ali takes Esi to Bamako to meet his people and they have a wonderful holiday.

Ali rarely visits Esi, and she is especially lonely during the holidays that year. He visits on New Year's Day to bring Esi a new car as a gift. When Esi drops Ali off at Hotel Twentieth Century, she realizes her marriage is a dead end. She visits Opokuya and agrees to sell her old car to her friend. After briefly increasing, the frequency of Ali's visits return to normal and one day, Esi tells Ali that this is not a marriage and she is not having it.

Several months later, Esi calls Opokuya to tell her about her break-up with Ali. After Opokuya visits Esi to comfort her and collect her car, Esi cries alone in the dark. Kubi, looking for Opokuya, arrives at Esi's house and embraces her. Thinking of her friendship with Opokuya, Esi repels him. Esi does not annul her marriage to Ali and they become good friends who have sex occasionally. Although Ali loves Esi in his own fashion, it is not adequate for Esi and she wonders what fashion of love she will ever consider adequate.

More summaries and resources for teaching or studying Changes: A Love Story.