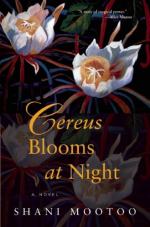 Pages 139 through 141 -- Otoh's feelings towards Mavis shift dramatically once she admits to having harrassed Mala as a child. Though Otoh invites her back to his bedroom, their evening together remains frustrating and sexually disappointing for them both. When Mavis finally falls asleep, Otoh remains preoccupied with thoughts of Mala, wondering at the power that she has held over his father all these years. Meanwhile, Mala lingers contentedly in the yard facing the faded cereus flowers, unwilling to leave the garden. As the morning dawns, she still refuses to sleep.

In the morning, Otoh dresses as his father would have in the days when he courted Mala, applying after shave for its scent alone, as he cannot grow facial hair. In his father's old attire, found in a box saved by Elsie, with some records and a broken gramophone, Otoh feels...