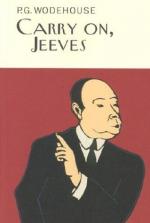 P. G. Wodehouse
This Study Guide consists of approximately 27 pages of chapter summaries, quotes, character analysis, themes, and more - everything you need to sharpen your knowledge of Carry on, Jeeves!.

This detailed literature summary also contains Topics for Discussion and a Free Quiz on Carry on, Jeeves! by P. G. Wodehouse.

P.G. Wodehouse's Carry On Jeeves is the story about Bertram "Bertie" Wooster and his gentleman's gentleman of a servant, Jeeves. Jeeves has a head suited to fix the oddest of problems and seems almost magic at times with his ability to understand people. Although Bertie is unsure at first of Jeeves, Bertie soon realizes that Jeeves is a necessity that no gentleman should be without.

The story takes place during the early part of the twentieth century in London. Bertram Wooster has just had to let his former servant go for stealing. The agency sends over Jeeves the next day. Bertie is instantly taken with Jeeves and his mannerisms. Bertie is called to his Uncle Willoughby's house by Bertie's fiancee, Florence. Florence is upset that Willoughby has written a book that describes her father, in his younger days, getting into trouble. She demands that Bertie steal the book and destroy it or she will not marry him. Bertie takes the book and locks it in the chest in the room he is staying at but doesn't know what to do with it. Willoughby begins to look for the book and searches the chest in Bertie's room but finds nothing. Jeeves has mailed the book on and Bertie fires him when Florence ends the engagement. The next day Bertie realizes that he didn't want to marry Florence and rehires Jeeves.

Bertie's friend, Corky, needs help getting his uncle to agree to Corky's engagement. Jeeves comes up with a brilliant plan but the scheme goes a little awry when the uncle marries the girl and produces an heir. Corky is an artist and his uncle gets him to paint a picture of the child. Corky does so but the picture makes the child look hideous and the uncle swears to cut Corky off from his financial help. Jeeves then tells Corky that he should take the picture to the papers and have them run it as a comic. Corky does so and makes quite a bit of money.

Jeeves continues to help Bertie's friends with all their problems from financial and romantic to needing a good cook. Regardless of the situation, Jeeves almost always seems to have a plan. On occasion the plan doesn't go quit right, but Jeeves is able to fix the situation with ease. Jeeves is the envy of all that know Bertram, but despite their best efforts, Jeeves is loyal to Bertram and can't be stolen away no matter how much money is offered. Jeeves never tells Bertram much about himself, friends, family, or the money he acquires throughout the story, but is as loyal as a friend can be.

More summaries and resources for teaching or studying Carry on, Jeeves!.