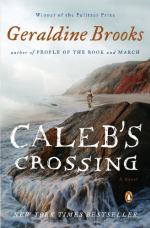 Related Topics
The Secret Chord
People of the Book

Geraldine Brooks
This Study Guide consists of approximately 46 pages of chapter summaries, quotes, character analysis, themes, and more - everything you need to sharpen your knowledge of Caleb's Crossing.

This detailed literature summary also contains Topics for Discussion and a Free Quiz on Caleb's Crossing by Geraldine Brooks.

This historical novel, set in pre-revolution America (the mid-to-late 1600s) is the story of a young Puritan girl and her long-term relationship with a native boy. Over a period of several years, as it chronicles the struggles of the two friends to determine and retain their individual identities, the narrative also explores thematic questions related to the nature of God and the interrelationship between sin, redemption and rebirth.

Each of the novel's three parts begins with a brief explanation of Bethia's situation at that particular time of her life, and is followed by detailed, chapter-by-chapter narration of how she arrived in that situation.

Part 1 begins with Bethia's description of lying awake and listening to her father (Pastor Mayfield) and brother (Makepeace) argue about whether it's wise to bring a boy named Caleb into their household, Makepeace arguing that Caleb is little better than a pagan and Mayfield arguing that there is no better way to teach such people the Christian way. Bethia describes how she and Caleb came to be good friends and how she is both excited and scared by the prospect of his moving into her home. Narrative action in this part of the book also explores the tensions between whites and natives on the island where Bethia and her family have made their home, and the tensions within her own family. By the end of Part 1, Caleb and his friend Joel have become thoroughly versed in Christian studies and professed themselves Christian, suppressing their native identity (which, however, resurfaces occasionally). Meanwhile, Bethia's family has suffered several serious losses and Bethia has come to see herself as a dangerous sinner.

Part 2 begins with Bethia's description of her new situation, as housekeeper for a school of teenaged boys in Cambridge, Massachusetts. She describes how the losses of Part 1, combined with new losses that she describes in Part 2, led her, Makepeace, Caleb, and Joel into the unhappy situation in which they now find themselves. Over the course of several months, Caleb and Joel become deeply involved in their new studies, the native aspects of their personality and identity surfacing only occasionally. Meanwhile, Bethia becomes involved with Samuel, the son of the school's headmaster, and a young native woman, Anne, comes to study. Bethia's quick thinking and determined action avoid a scandal when Anne suffers a miscarriage, having apparently been impregnated by a white man of considerable social and political status. At the same time, Bethia is becoming the object of romantic interest from Samuel, the son of the school's headmaster, and at one point gives in to her physical desire for him, afterwards once again believing herself to have given in to Satanic desires. Also, her friendship with Caleb deepens.

Part 3 begins with commentary by the now elderly Bethia on her happiness once she returned to the island several decades before and starting a family with Samuel. She describes how she and Samuel married, went to Europe to enable Samuel to study medicine, and had a son, the first of several descendants. Bethia also describes how Caleb and Joel's studies transcended the racially-defined judgments and negative attitudes imposed upon them by their teachers and their fellow students, raising them to the top of the class. Shortly before their graduation, Joel is murdered by natives resentful of white incursions into their territory and spirituality, while Caleb falls ill with tuberculosis. A desperate visit made by Bethia to Caleb's uncle, a powerful pawaaw (medicine man) results in her being given the means to give Caleb a comfortable death. The book draws to a close describing Bethia's claim that the story she has told in these pages is not a story of triumph, but a lament.

A brief afterword by the author describes the historical sources she used as the basis for the book.

More summaries and resources for teaching or studying Caleb's Crossing.