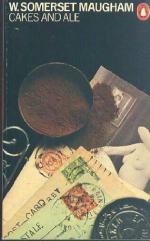 Cakes and Ale: Or the Skeleton in the Cupboard Summary & Study Guide

W. Somerset Maugham
This Study Guide consists of approximately 62 pages of chapter summaries, quotes, character analysis, themes, and more - everything you need to sharpen your knowledge of Cakes and Ale.

Cakes and Ale: Or the Skeleton in the Cupboard Summary & Study Guide Description

Cakes and Ale: Or the Skeleton in the Cupboard Summary & Study Guide includes comprehensive information and analysis to help you understand the book. This study guide contains the following sections:

This detailed literature summary also contains Related Titles and a Free Quiz on Cakes and Ale: Or the Skeleton in the Cupboard by W. Somerset Maugham.

Cakes and Ale by W. Somerset Maugham tells the story of author William Ashenden's series of contracts over decades with a greatly renowned novelist, and the need of his would-be biographer for details that William alone can provide. The novel deals with the craft of writing and the foibles of those who do it.

The narrator of Cakes and Ale, William Ashenden, a writer not currently in vogue, is approached by a colleague with whom he has had little recent contact. William rightly suspects an ulterior motive in Alroy Kear, a man who has done well on moderate talent. Roy has been asked by the widow of a truly famous novelist, one year departed, to write a biography of her husband. Amy has collected a great deal of information that fits her view of how Edward (Ted) Driffield should be portrayed, and Roy agrees to omit or downplay less than savory elements. He wants, however, to see the whole picture in order to make the creative decisions himself.

William as a teenager is befriended by Ted before he becomes famous and while he is married to a former barmaid, Rosie. He himself has lived a less than genteel life. William's acquaintance with the Driffields ends when they skip town, leaving a host of creditors unpaid. Years later, as a medical student in London, William runs into Rosie on the street and returns to their literary orbit. Ted is beginning to make a name for himself, championed by Isabel (Mrs. Barton) Trafford, a socialite who promotes and manages promising talent. William and Rosie become lovers, and he suspects that she is having affairs with other male friends. This second period ends when Rosie runs off with "Lord George" Kemp, a former lover from before Ted.

While recovering from pneumonia, Ted marries his nurse, Amy, who rearranges his life and molds him into a famous and cherished author. William is reunited with Ted once in this period and briefly meets Amy. Roy, however, becomes close to them and is asked to write his life. Amy and Roy both denigrate Rosie, whom William still cherishes as a good person, and see the only good thing about her is abandoning Ted so his genius could flourish. They believe Rosie dead for some ten years. William, however, knows that she is alive in Yonkers, New York, a wealthy widow, for he has visited her there. Rosie reveals that a harrowing passage in one of Ted's novels is based on them losing a child and she having a one-night stand to help survive it. William will not share this with Roy and Amy.

More summaries and resources for teaching or studying Cakes and Ale: Or the Skeleton in the Cupboard.

Cakes and Ale: Or the Skeleton in the Cupboard from Gale. ©2005-2006 Thomson Gale, a part of the Thomson Corporation. All rights reserved.