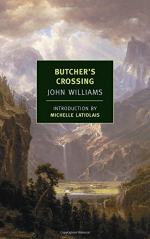 Related Topics
Stoner
Augustus: A Novel
Nothing But Night

John Williams
This Study Guide consists of approximately 35 pages of chapter summaries, quotes, character analysis, themes, and more - everything you need to sharpen your knowledge of Butcher's Crossing.

The border town of Butcher's Crossing symbolizes the struggle between industry and nature. Its economy is sustained through the destruction of nature. The primary source of wealth in the town comes from buffalo hides, which are bought in the eastern parts of the country where animal skins are considered fashionable clothing. Butcher's Crossing withers and dies when the market demand for buffalo hides disappears.

Harvard College symbolizes civilization and education. Andrews admits that he left Harvard in his third year there so he could come west, seek out adventure, and commune with nature. Through this act, Andrews rejects his destined life of civilization, education, and comfort in order to pursue experiences in the unsettled parts of the country.

More summaries and resources for teaching or studying Butcher's Crossing.