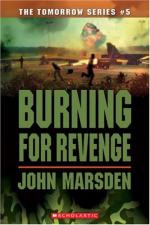 John Marsden (writer)
This Study Guide consists of approximately 33 pages of chapter summaries, quotes, character analysis, themes, and more - everything you need to sharpen your knowledge of Burning for Revenge.

This detailed literature summary also contains Topics for Discussion and a Free Quiz on Burning for Revenge by John Marsden (writer).

Burning for Revenge is the fifth book in the seven-book Tomorrow series. In this book, the team of ragtag teenagers continue to battle against an unnamed army with the hopes of one day being reunited with their families and returned to New Zealand.

When the novel opens, the teenagers are in hiding in their hometown, Wirrawee, after the events of the last novel. After a week of hiding, Lee decides that he can't sit around doing nothing. Even if it means dying, he wants to get back to the battle and take out as many Aussie soldiers as he can. The group has long ago decided that when one among them makes a decision, the rest of them will follow. Reluctantly, the rest of the teenagers pack up their belongings and prepare to move. Only Kevin refuses, but the others soon bully him into joining, regardless of the fact that he is clearly suffering from a mental breakdown. The teens manage to make their way to the Wirrawee city dump in search of materials, but the enemy soon intercepts them. Jumping into the back of abandoned dump trucks, the teens are unexpectedly brought to enemy headquarters and abandoned at the army base, still in the back of the trucks.

At first, the teenagers feel it would be best to explore their surroundings before leaping to any conclusions, but when Ellie is forced to kill two soldiers inside the barracks during her exploration, the teens have no choice but to fight their way off the airfield. Armed with nothing but a few rifles and a few jerry cans of petrol, the teens manage to blast away nine airplanes and at least three enemy jeeps. Their own truck flips and explodes, but all the teens manage to survive, unscathed. With enemy soldiers in hot pursuit, the teens slip into the nearby river, which allows them to travel undetected to Stratton, where rumor has it Homer's parents are living in hiding.

Although they were expecting a certain level of destruction, when the teens arrive in Stratton, they are shocked at the city's state of disrepair. Aerial bombings have destroyed much of the city's architecture and enemy soldiers have taken up residence in the wealthy mansions. Ellie and her friends break into Ellie's grandmother's house with the hopes of finding food and shelter. Although the house is empty, the teenagers know they are not alone. An afternoon mugging the next day introduces the teens to the street gang now running Stratton, made up entirely of children aged six to thirteen. They steal everything from the teens, including Ellie's only copy of her parents' photograph.

In the days that follow, the teenagers discover a peaceful rhythm. Kevin beings tending to Grandma's garden, Ellie kills a lamb, and everyone successfully fishes for trout. Soon, the teens are eating well, but Lee's mysterious late night excursions have left everyone feeling unsettled. If Lee is waging a private war against the enemy, he is putting them all at risk. Ellie decides to track Lee during one of his evenings out, and she follows him to barn in the countryside. A beautiful woman soon joins Lee, and Ellie can feel her heart breaking as the two embrace. However, this young love is not as it appears. The girl is clearly setting Lee up, preparing to turn him in to the enemy. With no choice but to save her friend, Ellie sets the barn on fire before the enemy can reach him. The pair successfully escapes, but their relationship will never be the same.

More summaries and resources for teaching or studying Burning for Revenge.