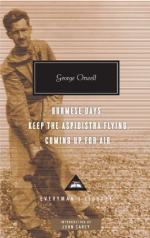 Burma, during the time considered by the novel, was a region of India; both regions were colonial possessions of the English Empire. In 1948, Burma gained independence from the United Kingdom and today the country is known as the Union of Myanmar. Burma has a diverse population which was further complicated by the English-sponsored importation of large numbers of Indians and Chinese laborers. Burma's complex history during the period of 1886 through the time of the novel is interesting but largely unimportant to the novel's development.

Kyauktada is a small town in Burma and is generally considered to be a lightly fictionalized representation of Katha, Burma—a town today known as Kathar in the Sagaing Division of Myanmar on the bank of the Ayeyarwady River. Kyauktada has a population of four thousand, including perhaps two hundred fifty Indians, sixty Chinese, seven Europeans, two mixed-blood Eurasians, one fakir...