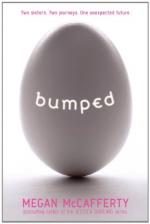 Megan McCafferty
This Study Guide consists of approximately 33 pages of chapter summaries, quotes, character analysis, themes, and more - everything you need to sharpen your knowledge of Bumped.

The novel is set in the near future and a virus has made it unlikely that any woman over eighteen can conceive a child. Melody Mayflower and Harmony Smith are twins who were separated soon after birth. Both girls required medical attention after being born and both were addicted to whatever drugs that their mother was using prior to their birth. The organization overseeing their adoption felt there was a better chance to get the girls adopted if they were separated. Harmony is adopted into a strict religious community and raised there. Melody, meanwhile, is adopted by a well-educated couple who see teen surrogates as the way of the future.

In many ways, the girls' lives are a stark contrast but in some ways they are very similar. Though Harmony is raised in a religious atmosphere and is taught from childhood that her ultimate goal in life is to believe what she's told by the church elders and grow into the roles of wife and mother. Melody is taught to be everything wealthy parents could possibly want in a surrogate mother and taught she is to give birth, give up the child, and go on to college with the money she's paid. Melody's parents are so certain she's going to deliver multiple children and earn hundreds of thousands of dollars doing so that they borrow against her future pregnancies.

Meanwhile, the twins learn about each other. Melody has sold her uniqueness to the adoptive parents and knows Harmony will threaten that sale. Harmony is feeling an empty space in her life from the lack of demonstrative love among the people of her community. She continues to feel this even after being forced to marry a young man who is more interested in boys. She runs away and hopes that luring Melody back to Goodside will help assuage the loneliness.

Melody is under contract for a pregnancy but her conception is held up only by the adoptive parents' choice of a father for the child. In this futuristic world, there are young men who hire out to "bump" with these girls and the adoptive parents eventually settle on one of these - Jondoe - who is a celebrity in his own right. But it's Harmony who gets the message about the proposed "bump" and Harmony who meets and has sex with Jondoe. She believes Jondoe might like her for herself but overhears him telling someone he'd lied to Harmony in order to seal their deal. Harmony returns to her community, newly pregnant, with her husband and her pregnancy as apparent proof of their consummated relationship. Melody realizes she doesn't want to be a surrogate and decides to take control of her life, including her love for her best friend, Zen. And just at that moment, Jondoe shows up looking for Harmony. He and Melody set out to find her together.

More summaries and resources for teaching or studying Bumped.