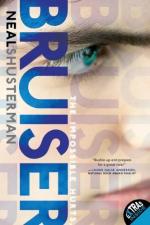 Bruiser is a novel by writer Neal Shusterman. Bruiser is about a teenage boy who is so standoffish at his school that his fellow students voted him most likely to receive the death penalty. However, when Bronte and Brewster begin to date, Bronte begins to bring Brewster out of his shell, placing him in the impossible position of having to reveal to her a special gift that he possesses. This places his life in danger when he cares about another person. Bronte and her twin brother, Tennyson, try to help Brewster, but instead allow themselves to become addicted to Brewster's special gift. Bruiser is a novel about the pain of living and the ways in which everyone learns to deal with it and the addictions that only delay reality.

Tennyson is not happy when he learns that his sister has begun dating Brewster Rawlins, an outsider at their school. Brewster is also known as the Bruiser because of his immense size and his anti-social behavior. Tennyson warns Brewster away from his sister, but Bronte refuses to allow her brother to dictate who she can and cannot date. Bronte continues to see Brewster, slowly getting to know a boy who has always been there, but has always lived on the outside.

One afternoon while on a picnic with Brewster, Bronte sprains her ankle. However, when Brewster touches her, the pain instantly vanishes. A few days later, Tennyson points out that Brewster is now limping. Not long after that, Bronte sees scars and bruises on Brewster's body and demands to know if his uncle is abusing him, but Brewster denies it. Bronte believes him, only to see the truth on his body a short time later. Bronte wants to call the police, but Brewster tells her that he and his little brother would be separated if she did. Hence, Bronte allows Brewster and Tennyson to come up with an excuse for Brewster's bruises to hide the truth.

Brewster returns home from school that same day to find his uncle in a rage. As Brewster tries to fight back for the first time in his life, Brewster's uncle begins to have a stroke. As an empathy, Brewster begins to absorb the effects of his uncle's stroke, to experience his uncle's death. However, Brewster wants to live. Hence, Brewster makes his way out of his uncle's house and leaves him to die. Later, Brewster and his brother move into the home of a neighbor where Brewster must pretend to dislike his new foster parents to prevent himself from absorbing their ailments.

Bronte and Tennyson, worried about Brewster and his future, talk their feuding parents into taking in the two orphaned boys. From the first moment Brewster moves into the house, Bronte and Tennyson's parents stop fighting and begin to get along for the first time in over a year. At the same time, Tennyson begins to feel more optimistic about life despite the imploding of his relationship with his girlfriend. Tennyson eventually figures out what it is Brewster does, that his healing powers go beyond physical ailments. However, Tennyson feels so good that he cannot stop allowing Brewster to take his pain.

One day, her mother's lover comes to the house. Bronte expects an emotional hurricane to shatter her parents, but instead they take the situation calmly and with great maturity. Brewster, however, is suffering from some unknown pain. It is then that Bronte realizes what Brewster has done for her family. Bronte leaves the house so that she can think things through and accidentally hits her head in the high school pool. Brewster finds her and takes the injury away, causing his own drowning. By the time Bronte and Tennyson find him, it appears to be too late. However, Tennyson realizes that if they give back some of what Brewster has taken, he might have a chance. Brewster begins to breathe again, but does not begin to recover until the day Bronte and Tennyson's parents announce their impending divorce.