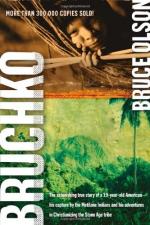 Bruce Olson
This Study Guide consists of approximately 26 pages of chapter summaries, quotes, character analysis, themes, and more - everything you need to sharpen your knowledge of Bruchko.

This detailed literature summary also contains Topics for Discussion and a Free Quiz on Bruchko by Bruce Olson.

The story opens with Bruce Olson talking to an Motilone Indian chieftain Ayaboquina, when an outlaw named Humberto Abril rushes up and interrupts their conversation. He says he has the right to claim and settle the land the Motilone Indians are living. Though Abril is talking to Bruce, another Motilone Indian named Bobby calmly interjects, saying that Abril has been given land and that he chose to sell it, and that they won't give him any more.

The story then drops back in time, describing Bruce's youth among a family of Lutherans and a father who ridicules Bruce's view of God. Bruce loves language and studies on his own, including Latin. He begins attending an interdenominational church with his friend who describes a similar salvation experience to that of Bruce. A missionary then arrives to address the congregation and Bruce is taken back by the man's appearance which includes dirty sneakers. Over the coming months, he forgets that initial impression and comes to believe he is called to do missionary work. He studies South America and eventually understands that is to be his mission field.

Bruce is disappointed that his dream of earning a doctorate in languages is to be cast aside an puts in an application with a mission board. He's turned down and uses that as his excuse to drop the idea, but realizes that God still wants him in the mission field. He drops out of college and with a plane ticket and seventy dollars, goes to South America where he expects to be met by a missionary who never shows up. Alone in a foreign country, he meets people through a series of chances and is eventually taken into the jungle where he believes he encounters the tribe he seeks but later discovers that it was another tribe, the Yuko.

He later encounters the Motilone Indians and spends years with them. It takes months to learn the language and he is depressed at the time, during which he can't cross the language barrier to share his knowledge of Jesus. He continues his work and eventually makes progress though it's a long-term project. He introduces basic medicines and hygiene practices that become generally accepted. Most importantly, he comes to be part of a family and makes a "pact" with Bobby, the man he comes to know as brother. Bruce happens to meet a young woman who wants to help with his work but she is killed in an automobile accident before joining him. When Bobby is also killed by outlaws who want the land for their own, Bruce is devastated. It takes the prayer of Bobby's adopted son and the words of a government official to make him realize that Bobby's life and Bruce's work have had purpose.

More summaries and resources for teaching or studying Bruchko.