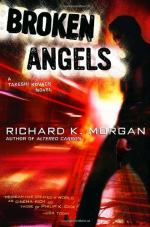 Broken Angels is a novel by author Richard K. Morgan and is one of the novels in a series of Takeshi Kovacs novels. In this novel, the setting is the 25th Century and it takes place in space. The main character is Takeshi Kovacs, a former U.N. envoy soldier. Kovacs is now an independent warrior. In the 25th Century and in the world which Kovacs lives, when someone dies, they can be resleeved or put into a new body. While Kovacs is recovering from war injuries in a hospital, he meets a rogue pilot by the name of Jan Schneider. Jan Schneider talks Kovacs into working on a mission with him to dig up a hidden Martian spaceship.

The trio recruit some of the best soldiers in the war to help with their expedition. Not knowing what they are up against, they encounter challenge after challenge when the crew lands on the planet where they are plan on digging up the Martian spaceship,. Giant mechanical spiders, radiation sickness, and a feeling that there is a mole in their group that is trying to sabotage the mission are just a few of the obstacles.

In the end, some of the crew members die for the cause. Others become traitors. The biggest traitor of them all turns out to be the least likely culprit, the archaeologist, Tanya Wardani.