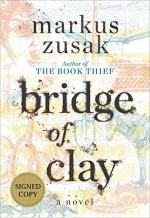 This Study Guide consists of approximately 59 pages of chapter summaries, quotes, character analysis, themes, and more - everything you need to sharpen your knowledge of Bridge of Clay.

This detailed literature summary also contains Quotes and a Free Quiz on Bridge of Clay by .

The following version of this book was used to create the guide: Zusak, Markus. Bridge of Clay. Doubleday, 2018.

Bridge of Clay is the story of Clay Dunbar and his four brothers, Matthew, Rory, Henry, and Tommy, as they struggle to come to terms with the disappearance — and then sudden reappearance — of their father, in the years that follow the death of their mother. Narrated by Matthew Dunbar, the story intertwines two timelines which lead up to the present tense of the novel: recent events, focusing on the reappearance of the boys' father, Michael Dunbar; and the more distant past, in which the boys' parents first meet and fall in love.

Penny Dunbar, formerly Penelope Lesciuszko, grows up in communist Poland with her father, Waldek; she is a gifted pianist who shares her father's passion for the poetry of Homer. When Waldek grows concerned about Penelope's future under the communist regime, he arranges for her to travel to Vienna under the pretext of playing in a concert; she is instead processed in a refugee camp, sent to Australia, and never sees her father again.

Meanwhile, Michael Dunbar grows up with only his mother in a rural town in Australia. He and his childhood sweetheart, Abbey Hanley, study hard at school and move to the city; however, Michael struggles to make it as an artist, and Abbey's interest in him wanes. One day she unexpectedly leaves him for another man, and they soon divorce. Five years later, Penny, now living in the same city as Michael, hears the news that Waldek has died. She takes her savings and buys a piano, but it is sent to Michael's address by mistake. Because of this, the two meet and fall in love.

Michael and Penny move to 18 Archer Street (where much of the novel takes place) and have five children together. They lead a normal enough life, though the boys are prone to fighting and arguing. Penny is especially close with her son Clay, with whom she shares her life story. One day, though, Penny falls ill. Diagnosed with cancer, she tells her family she has only six months to live, yet she survives over two and a half years before dying.

After the death of Penny, the Dunbars' lives are all changed. Michael Dunbar begins to leave home for days on end, until one day he disappears altogether. This earns him the nickname of "The Murderer," as the boys feel he has all-but killed them. Matthew, the oldest boy, becomes the breadwinner and parent-figure for his brothers. Clay becomes quiet and insular, and takes to punishing himself by running long distances and fighting with other boys. Rory is expelled, whilst Tommy collects a strange variety of animals, including a mule, which he names after characters from his mother's favorite books. In this period, Clay falls for a new neighbor, Carey Novac, who is a trainee horse racer. They become close, and Clay shares his secrets with her.

One day, Michael Dunbar returns to his sons at Archer Street, and asks them to help him build a bridge near his new home; the river near his home tends to flood, and he has been trapped away from home before. They tersely ask him to leave, but Clay keeps his father's address and feels it is his destiny to help his father build the bridge. After telling Carey of his plans, he departs.

Clay finds his father in a town called Silver, and though the two men are both mostly silent, they set to work on the bridge. They begin the process of bridge-building, and slowly discover more about one another. Over the months, Clay moves back and forth between his brothers and his father, acting as a kind of bridge between their two worlds. In the meantime, Carey is increasingly successful as a horse racer, and rides in ever more prestigious races.

On a trip home, Clay and Carey spend the night together. The following day, Clay travels to Silver to continue work on the bridge, but Carey has an accident whilst training. She dies before anyone finds her, and Matthew takes it upon himself to tell Clay. Travelling to Silver, Matthew tells Clay of Carey's death, and he speaks openly with his father for the first time.

Clay attends Carey's funeral, and is more resolved than ever to build the bridge: for his mother, and for Carey. When the bridge is finally complete, he returns home and burns the mattress on which Carey and he slept together. With the first rains of the season, all the boys drive out to see the new bridge. It withstands the rapidly flowing water, and Clay deems it a success. Once more returning home, he tells Matthew everything his mother had ever said him about their family's history, and he also explains that he, Clay, helped her to commit suicide when the pain of her cancer became too unbearable. Matthew now understands why their father had to leave, and takes it upon himself to write down the whole story; it will be called Bridge of Clay.

With the truth told, Clay leaves for Europe and travels alone for several years; the other brothers, in the meantime, reestablish their relationships with their father. At the close of the novel, and with the family reunited, Clay returns home to witness the marriage of his brother Matthew; their father is also present at the wedding.

More summaries and resources for teaching or studying Bridge of Clay.