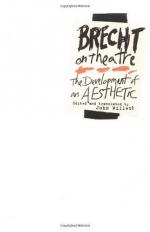 Brecht on Theatre: The Development of an Aesthetic Summary & Study Guide

Brecht on Theatre: The Development of an Aesthetic Summary & Study Guide Description

Brecht on Theatre: The Development of an Aesthetic Summary & Study Guide includes comprehensive information and analysis to help you understand the book. This study guide contains the following sections:

This detailed literature summary also contains Topics for Discussion and a Free Quiz on Brecht on Theatre: The Development of an Aesthetic by Bertolt Brecht.

This collection of essays and writings by twentieth century theatre innovator Bertolt Brecht chronicles the development of his theories and practices, specifically as related to his socio-political philosophy of socialist enlightenment. The writings were created over a period of almost forty years and cover a number of important transitions in both his life and work. In addition to examining the question of theatre's role on society, they also explore the questions of the relationship between theory and practice and the use of the actor as a primary means of theatrical communication.

The collection begins with an introduction from the editor, who briefly discusses the book's intention and the process by which Brecht's many writings were sorted and organized.

Part 1 of the collection proper dates from Brecht's years as an increasingly influential theatre creator in his native Germany. Here he traces some of the origins of his personal theatrical aesthetic, praising his predecessors and commenting on ways in which his own work takes inspiration from theirs. He draws connections between the way in which society in general is beginning to move towards a more socialistically enlightened perspective and explores how theatre can simultaneously function as both a mirror and a trigger of such change.

The writings in Part 2 are taken from the beginning of Brecht's period of exile from Germany, caused by the rise to power of Hitler and the Nazi party. In this period, Brecht begins to solidify his beliefs and practices into principles, developing specific and innovative terminology (epic theatre, the alienation effect) for the work he is doing, terminology that has over the years moved into common usage among theatre practitioners.

The very brief Part 3 is a single document, what Brecht calls an "organum". Here he essentially sums up the writings that have come before, refining his ideas even further and providing a clear example (in his narrative of the development of a specific "epic theatre" project) of how those ideas should be executed.

In Part 4, however, his ideas begin to take a slightly different direction. While he continues to write with barely concealed passion about what he believes to be socialistically true and necessary in both life and theatre, he appears to be somewhat softening his hard-line stance. For example, before he had contended there was little place for a wide range of human emotion in both plays and audience, to recognize the value of a somewhat broader range of experienced feeling. By the time the last piece of writing in the collection (a memo from Brecht to the members of his acting company) was put to paper, the reader sees that his once somewhat harsh aesthetic has evolved to the point where he is specifically suggesting that his style of presentation be modified to allow for increased audience appeal. In other words, his principles have shifted, from a place of rigid idealism and intellectualism into broader, more open emotionality.

Brecht on Theatre: The Development of an Aesthetic from BookRags. (c)2021 BookRags, Inc. All rights reserved.