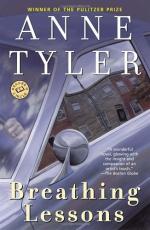 Anne Tyler
This Study Guide consists of approximately 39 pages of chapter summaries, quotes, character analysis, themes, and more - everything you need to sharpen your knowledge of Breathing Lessons.

Maggie and Ira Moran set out for a friend’s funeral and end up going on a journey through the past to discover people and events can never be changed and you will always end up right back where you started. Maggie’s best friend from childhood, Serena Gill, has just suffered the death of her husband, Max. Maggie and Ira travel from Baltimore to Deer Lick, Pennsylvania, in order to attend his funeral. While there they see their old friends from childhood and adolescence. They reconnect with the faces of their past and they are all forced to a realization of their own progress toward death. Rather than having a funeral for Max, Serena makes all of her friends sing and re-create the ceremony of her wedding. After the funeral, she plays a video of her wedding. In seeing their decades past images, everyone begins to remember their old dreams and desires. They remember what they had and what they lost, what they wanted from life and what they ended up with.

These images of her past make Maggie think of other failings in her life and she decides to fix her son’s marriage and bring her ex-daughter-in-law and granddaughter back home with her. She and Ira begin the long drive home and Maggie begins to plot how she is going to convince Ira to make a stop at her ex-daughter-in-law’s house. Their journey is derailed when they are run off the road by an old Chevy. In order to get revenge on the driver, Maggie impetuously tells him his tire is falling off as they drive past. However, she is horrified to realize the driver is a helpless old black man who will probably think she is a racist. Maggie makes Ira turn around and they try to tell the man, Mr. Otis, they made a mistake but he is convinced his tire is falling off. Maggie and Ira eventually drive Mr. Otis to a nearby gas station where his nephew works and will be able to tow his truck. Maggie and Mr. Otis become fast friends and Mr. Otis tells them about his failing decades-old marriage. Ira mulls over the fact that Maggie always seems to get along so well with people. He thinks the world must be as she sees it and not as he sees it because he is never able to connect with people the way she does.

After this detour in their journey, Maggie is able to convince Ira to go to their ex-daughter-in-law’s house in Cartwheel, Pennsylvania. They arrive to find their granddaughter has grown into a child when they both still remember her as a baby. Their ex-daughter-in-law, Fiona, is not particularly happy to see them but it is clear she still loves their son Jesse. Maggie then attempts to arrange a meeting between Jesse and Fiona but she makes the same mistake she did when she was arranging their marriage so many years ago. She goes overboard with her story and lies to Fiona in order to convince her Jesse still cares about her. Fiona and their granddaughter, Leroy, return home with them and Jesse eventually arrives as well. While it is clear Jesse still loves Fiona, Maggie’s lie is discovered and Jesse and Fiona are both too prideful to admit they care without Maggie’s lie holding them together. Once again, Maggie finds herself alone with Ira as Fiona, Leroy, and Jesse all leave the house. Maggie goes upstairs to her room with Ira and they go to bed early in order to prepare for the long drive they will have the next day.

Through the journey of Maggie and Ira Breathing Lessons explores the world of human relationships and connections--marriage, friendship, and family. Maggie’s friend Serena marries Max because she feels it is time to marry and because she feels marriage to Max will provide her with the sense of normalcy for which she has always secretly yearned. Serena is friends with Maggie because she is the only person who really accepts her and Maggie is friends with Serena because she fascinates her. Maggie married Ira because she believed she had found her soul mate and the one man she could lean on as a tower of strength. Ira married Maggie because he wanted desperately to be connected to someone and to be wanted. Jesse married Fiona because he wanted a child and Fiona married Jesse because she was desperately in love with him. Each of the characters in the novel yearns to be the center of someone’s universe. So they marry the person they think will provide them with this sense of centrality or they try to create a family that will make them feel necessary and valued.

More summaries and resources for teaching or studying Breathing Lessons.