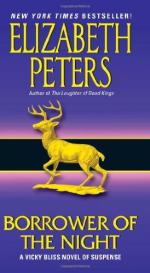 Borrower of the Night Setting & Symbolism

Schloss Drachenstein is the castle where Vicki, George, Tony and many others go to look for the Riemenschneider relic. Although it is a hotel, it has been the home of the Drachenstein family for generations.

The relic that the characters in the book are looking for. It is never fully described anywhere and so all that is known about it is the fact that it has three large jewels on it that are very expensive and a vague description as to what people and figures are carved on it. It is eventually found in Konstanze's room.

The poison that Konstanze uses to slowly poison her husband. It is found by Vicki in a secret compartment in her husband's room with a small green frog figurine.

There is a seance lead by Miss Burton. It is during the seance that Irma talks about...