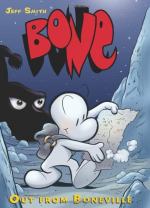 Jeff Smith (cartoonist)
This Study Guide consists of approximately 39 pages of chapter summaries, quotes, character analysis, themes, and more - everything you need to sharpen your knowledge of Bone.

This detailed literature summary also contains Topics for Discussion and a Free Quiz on Bone by Jeff Smith (cartoonist).

Bone is the story of three cousins who are forced out of their home into a strange land. They encounter forces and creatures they couldn't have imagined. The Bones are unlikely heroes, but help to save a princess and the world.

Phoney Bone is run out of Boneville after a scandalous run for the mayor's office. His cousin's Fone and Smiley go with him into the desert, although they had nothing to do with the scandal. Soon they are separated due to a great swarm of locusts. Fone spends the winter in a forest that he has never heard of before, and by the time that spring comes along, Fone meets a girl named Thorn. Thorn agrees to help Fone, saying that maybe her Gran'ma Ben could help . Shortly after arriving at Thorn's house Gran'ma Ben comes home with Phoney. The group soon plans to go to the town of Barrelhaven where Gran'ma Ben enters a cow race. During the cow race, a group of terrible creatures called rat creatures show up and frighten the townspeople.

Gran'ma Ben and Thorn go back home, where they are attacked by the rat creatures. The great red dragon arrives to save them. Gran'ma is obviously unhappy to see the dragon, but they call each other by name, much to Thorn's surprise. Unable to hide the truth any longer, Gran'ma Ben explains that Thorn is really a princess of the Harvestar line. Thorn becomes angry at being lied to but has little time to come to terms with this new information. Thorn is no ordinary princess and is in touch with the dreaming realm and is a Veni-yan-cari, or an awakened one. The evil Lord of the Locusts needs Thorn to free him from his stone prison.

Gran'ma Ben and the others are forced to head to the city of Atheia for safety. Once there, the city is attacked by rat creatures and the hooded one who leads them turns out to be Gran'ma Ben's sister, Briar. The battle rages until Thorn and Fone Bone learn where the Crown of Horns is located. Together Thorn and Fone make their way to the dragon burial ground and are able to restore the balance and destroy Briar, although they cannot destroy the Lord of the Locusts who has gotten free. The dragons come out of the earth and put the Lord of the Locusts back into his stone prison. Fone cares for Thorn but cannot stay with her. The three Bone cousins are able to head home after having saved a princess and the world.