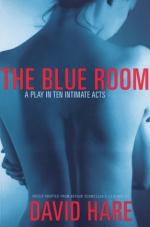 Additional Resources for The Blue Room by David Hare

David Hare
This Study Guide consists of approximately 41 pages of chapter summaries, quotes, character analysis, themes, and more - everything you need to sharpen your knowledge of The Blue Room.

At once a history, biography, and literary critique, the Liptzins' study examines Schnitzler's place in Austrian and world literature and illuminates some of the most important themes in the author's work.

A collection of excerpted criticism of Hare's plays, taken largely from theatre reviews in London and New York newspapers and magazines. Also includes a chronology of Hare's work.

In seven separate studies, Schorske provides a social and political history of turn-of-the-century Vienna that examines early modernism in art, music, and thought.

A collection of essays about Hare's most important plays, accompanied by a chronology of his work and a bibliography of Hare interviews...

More summaries and resources for teaching or studying The Blue Room.

The Blue Room from Gale. ©2005-2006 Thomson Gale, a part of the Thomson Corporation. All rights reserved.