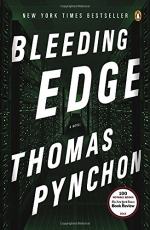 Thomas Pynchon
This Study Guide consists of approximately 38 pages of chapter summaries, quotes, character analysis, themes, and more - everything you need to sharpen your knowledge of Bleeding Edge.

“Bleeding Edge” is an alternative historical fiction mystery novel by Thomas Pynchon which follows the efforts of private fraud investigator Maxine Tarnow to look into the secretive computer security company hashslingrz before the terrorist attacks of September 11. Maxine, a divorcee and mother of two, is first alerted to hashlingrz by her old friend Reg Despard, a documentary filmmaker. Reg reveals he has been hired by hashslingrz to make a documentary on the company, but they have withheld tremendous amounts of information on even basic financial transactions from him.

Maxine delves into studying hashslingrz and its geek-turned-CEO, Gabriel Ice. Gabriel Ice and his company are known for aggressively recruiting new talent, and are believed to have dealings with the federal government as well. As Maxine studies the basic records of the companies, she notices serious discrepancies and issues, such as payments being made to other companies that no longer exist. Likewise, one of Maxine’s closest friends, Vyrva, reports her husband’s company and Deep Web program “DeepArcher” is being courted by Ice and hashslingrz. As Maxine continues her investigation, she comes into contact with March Kelleher, mother of Gabriel’s wife, Tallis. March hates her son-in-law, and suspects that Gabriel is up to no good.

Maxine’s investigations also bring her into contact with Nicholas Windust, a federal government operative whose work has also brought him into contact with hashslingrz. He and Maxine have long had a pseudo-relationship based on personal antagonism and casual sex. Maxine later comes into contact with Lester Traipse, CEO of a business bought out by Ice and hashslingrz. Lester worries his life is in danger, and reveals that Gabriel Ice is personally always anxious and angry. A short time later, Lester turns up dead. A scent identified as 9:30 Club cologne is discovered at the scene of the crime.

Reg soon reveals to Maxine that he has accidentally stumbled into the wrong room at hashslingrz, where a group of Arabs is working on a strange device. He also has film delivered to Maxine which shows a Stinger missile crew of white men on the rooftop of a building doing a practice run targeting a Boeing 767. Maxine sends the tape along to March who instantly contends that President Bush is up to something big and is working with hashslingrz to do it. Maxine isn’t totally convinced, but is worried about the direction the investigation is now heading.

Maxine comes to learn that 9:30 Club cologne stopped being produced years ago, and that Nicholas Windust wears it. She realizes Nicholas must have had a hand in Lester’s death somehow. As Maxine continues to dig into not only hashslingrz but the murder of Lester, she is warned to stay away. Maxine is undeterred. She contacts a Russian friend of March’s named Igor, who works with two hacker associates named Misha and Grisha. She asks them to identify the weapons in Reg’s videos. They confirm the missile launchers being used are Stingers, and the unknown device in the room of Arabs is a Vircator, which launches an electromagnetic pulse and disrupts and destroys electronic devices. March publishes the video on her blog.

When the terrorist attacks on September 11 happen, Maxine is stunned. March immediately blames the American government, arguing that it is clear that the government knew the attacks were coming and wanted to ensure that they would happen no matter what so that President Bush could seize unlimited power and become a dictator. Maxine does not believe this, though evidence seems to be to the contrary. Maxine arranges to meet with Nicholas Windust once more, only to discover he has been killed. She is warned once again to back off.

As Maxine learns from the Russians, Gabriel Ice is indeed working for the federal government, but that neither are working with the terrorists. Lester was killed because he was diverting funds to terrorist groups in the Middle East. However, other mysteries still remain – such as the true purpose Ice has in working with the government, who the men in the Stinger missile crew were, and why Nicholas was killed. As the novel ends, Maxine does her best to return to normalcy by allowing her kids to walk to school alone for the first time.

More summaries and resources for teaching or studying Bleeding Edge.