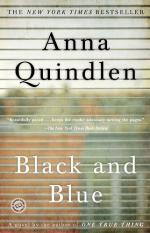 Anna Quindlen
This Study Guide consists of approximately 33 pages of chapter summaries, quotes, character analysis, themes, and more - everything you need to sharpen your knowledge of Black and Blue.

This detailed literature summary also contains Topics for Discussion and a Free Quiz on Black and Blue by Anna Quindlen.

Black and Blue is a novel by the Pulitzer Prize winning journalist, Anna Quindlen. In this novel, Frannie Benedetto has suffered horrible abuse by her police officer husband for nearly twenty years. Finally, Frannie comes to the conclusion that her husband will not stop beating her until she is dead. Frannie takes a chance and runs away with her son, becoming someone completely different. However, cops have resources other people do not and it is only a matter of time before her husband finds her. Black and Blue is a novel of transformation, of one woman finding the courage to not only leave a dangerous relationship, but taking the risk of losing everything to become someone new.

Frannie Benedetto married Bobby Benedetto despite the violence he perpetrated against her almost from the moment their relationship began. Frannie was in love and she believed love would make everything okay. However, the day Bobby breaks her nose, Frannie knows he will not stop until she is dead. Frannie uses her connections at the hospital where she works as a nurse to make arrangements to disappear.

Frannie is taken under the wing of a network of generous people who use their time and resources to help abused women leave their boyfriends or husbands. Frannie and her son, Robert, are driven out of New York and given a new name and a place to live. They have left behind a respectable life, a middle class home just a block from the bay, friends, family, and love for a small duplex and new name. Frannie does the best she can to make life easy for her young son, but every day his anger and confusion grows, creating a situation in which Frannie, who is now known as Beth Crenshaw, finds herself afraid for his future.

On the first day of school, Beth Crenshaw follows her unhappy son to school and meets another mother, Cindy Roerbacker. Beth and Cindy become good friends, sharing coffee and muffins most mornings while their children are at school. Beth also becomes friendly with Mike Riordan, the vice principal who has taken a special interest in Robert. Eventually Beth also gets a new job as a home health aid, helping sick people with some of the more difficult tasks associated with living at home.

Beth finds herself falling in love with big, kind Mike as she settles into her new life. Beth still misses her family and friends back in Brooklyn, but being away from her abusive husband and using a new name has given Beth a courage that leaves her feeling almost untouchable. In fact, Beth refuses to move again after her face is in the newspapers after an accident at a carnival, as she is tired of running and being afraid.

At the same time, Beth's son, Robert, is struggling with the lies and the truths that his mother has been telling him his whole life. Robert misses his father and cannot imagine he would ever do anything to hurt his mother. One night Robert calls home and speaks to his father. Beth, knowing this could be the one thing that could lead Bobby to them, continues to refuse to leave again. Instead, Beth turns to Mike with the truth.

Several weeks later, Bobby breaks into Beth's house in the middle of the night. They argue and Bobby chokes Beth into unconsciousness. When Beth wakes, Bobby is gone and so is Robert. Beth searches for Robert for months, but Bobby has disappeared and nothing anyone can do. Eventually Beth goes back to her life, marrying Mike and having another child. However, Beth continues to think of Robert and pray for his safety.

More summaries and resources for teaching or studying Black and Blue.