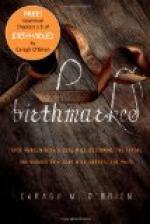 Caragh M. O'Brien
This Study Guide consists of approximately 27 pages of chapter summaries, quotes, character analysis, themes, and more - everything you need to sharpen your knowledge of Birthmarked.

"Birthmarked" is a novel by writer Caragh M. O'Brien. In this novel, Gaia is a midwife who has just delivered her first solo baby. When Gaia returns home, she discovers that her parents have been arrested for unspecified crimes against the Enclave. When Gaia learns that her parents are to be executed for their crimes, she sneaks into the Enclave to speak with her mother one last time. However, on the way to find her mother, Gaia witnesses the execution of a pregnant woman and finds herself compelled to save the child. Gaia is quickly arrested and interrogated, forced to choose between death and the betrayal of her parents. "Birthmarked" is a passionate novel about family, loyalty, and coming of age in a world governed by fear.

Gaia Stone has just turned sixteen, the age at which she is deemed old enough to practice her own trade. Gaia has studied midwifery under her mother. As the novel opens, Gaia is delivering her first child. The child, a girl, is the mother's first, making it that much more of a burden for Gaia to have to advance it to the Enclave. Gaia does her duty, however, because she is a loyal citizen serving the Enclave.

As Gaia makes her way home she runs into Old Meg, her mother's assistant. Old Meg tells Gaia that her parents have been arrested. Old Meg is going to the Dead Forest out of fear that she will be arrested next. Old Meg encourages Gaia to go with her, but when Gaia refuses, Old Meg gives her a small bag that her mother wanted her to have. Gaia ties the bag to her thigh and returns home to find a member of the Guard waiting for her. Captain Grey asks Gaia questions about her parents, but refuses to answer her questions.

Several weeks pass. Gaia does her best to remain loyal to the Enclave despite her fears for her parents. However, when a baker, who was once a friend of her parents, tells her that her parents are to executed, Gaia insists that he help her get into the Enclave so that she can speak to her parents. The man agrees and that night helps her sneak into the Enclave. Gaia walks to the area where she knows the prison to be, but is unsure of how to get to her parents. Then an execution begins. Gaia is shocked to find that one of the criminals to be executed is a pregnant woman close to her due date. Gaia cries out in outrage, but can do nothing to stop the execution. However, Gaia is able to trick the guard into thinking she is a friend of the family. They allow her to be alone with the bodies.

Gaia uses her skill as a midwife to cut the baby from the mother's womb. At first it appears that Gaia's efforts have been too late. Gaia performs CPR on the child. A man comes into the barn where she is hiding and Gaia is forced to run. Eventually trapped in a garden, Gaia is arrested. The child, who has miraculously begun to breathe, is taken from her by an Enclave doctor. Gaia is placed in a cell with multiple other women and left to guess at what the future might hold.

Gaia learns from the other women in her cell that her father was killed weeks ago attempting to escape. This pushes Gaia into a depression that is only lightened with brief trips out of the prison and thoughts of escape. One day Gaia meets Captain Grey near the prison and he takes her for a walk, warning her that she will soon be interrogated. Gaia learns that her mother is still alive and that the Enclave has the ribbon on which her parents recorded a record of the babies advanced from their sector. It is this code that so interests the Enclave.

During her interrogation, Gaia learns that the Enclave needs to find out who parented the babies advanced from her sector because they are thought to have a gene that stops the gene for hemophilia, a condition that is killing many inside the Enclave. Gaia finds herself in a difficult situation, forced to betray her parents or face death. Gaia breaks the code, but then finds a sympathetic guard, who coincidentally turns out to be her brother, who helps her escape.

Captain Grey comes back for Gaia, even though he too is a wanted man. Captain Grey and friends of Gaia's help her get into the Bastion to save her mother. However, Gaia's mother is far advanced in pregnancy and does not make it far. Gaia delivers her baby sister, and then watches as her mother bleeds to death. Gaia then flees the Bastion only to be caught by the Protectorate himself. Gaia and Captain Grey manage to escape. However, when they try to leave the Enclave, Captain Grey is caught. Gaia escapes and she keeps her word to Captain Grey by fleeing the city for the Dead Forest immediately.

More summaries and resources for teaching or studying Birthmarked.

Birthmarked from Gale. ©2005-2006 Thomson Gale, a part of the Thomson Corporation. All rights reserved.