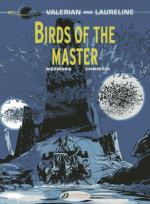 Birds of the Master (Valerian) Summary & Study Guide includes comprehensive information and analysis to help you understand the book. This study guide contains the following sections:

This detailed literature summary also contains Quotes and a Free Quiz on Birds of the Master (Valerian) by Pierre Christin.

As the graphic novel opens, Valerian and Laureline have crashed on a mysterious planet. They see a literal graveyard of crashed spaceships in the area and are struggling to figure out exactly what happened. Some people in a boat pick them up, but immediately begin ordering them about. They talk about the Master and their desire to work in order to please him. The people are all very skinny, and it soon becomes obvious that they are near starvation. They work hard, gathering food for the Master, but are given very little to sustain their own lives.

Each time someone objects to any part of the situation, the Birds of Madness arrive. They arrive in a huge flock and the people are afraid of them. The Birds focus on any person who is out of line with the Master's plan. Those bitten by the Birds are considered insane and are thrown into a pit. After a short time, they become compliant.

Laureline wants only to get away from the work details, fix their spaceship, and leave the planet. A young man named Sul catches their attention with his determination to kill the Master. When Sul attacks and is thrown into the pit, Valerian convinces Laureline that they have to rescue him. They wind up with a group of people fleeing the pit, and travel to the Master's inner sanctuary – an area where none of the others dare to follow.

They find the lines that feed the Master, and discover that the Master is a large, jelly-like creature. Valerian is the first to attack. Within seconds, he falls to his knees, overcome by images of his worst fears. Laureline picks up the weapon, but comes to a similar fate. Sul is next, followed by other members of the group. Valerian and Laureline realize that they need to work as a group to overcome the Master's power. When they do, they are triumphant.

With the exception of Valerian, Laureline, and Sul, everyone decides to remain on the planet, but agree to organize themselves in a way that is fair with no Master to make demands. Valerian and Laureline get their spaceship underway and plan to take Sul home after a stop to check out the damages to their ship. They agree that the situation was resolved successfully, except for the concern that the Master is still alive and out in the universe somewhere. As the novel comes to a close, Valerian's spaceship is leaving the planet with the Master securely attached to the top of the ship.

Birds of the Master (Valerian) from BookRags. (c)2022 BookRags, Inc. All rights reserved.