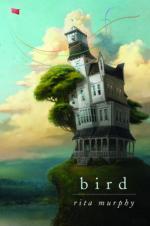 This detailed literature summary also contains Topics for Discussion and a Free Quiz on Bird by Rita Murphy.

Bird, by Rita Murphy, is a story about a wispy little girl who finds herself caught in a brush after a strong wind storm landed her near Bourne Manor on Lake Champlain. Miranda has few memories of her past when she is found by Wysteria Barrows, the solitary, dark owner of the Bourne Manor and widow of Captain Barrows. Bourne Manor is a large family home on the harbor on Lake Champlain with an ominous appearance and spirit to it. It is rumored by the local townspeople to be cursed.

The story begins with Miranda learning to live under Wysteria's direct control. Wysteria makes her money aiding local fisherman and sets Miranda to the task of fixing their fishing nets, a task that often injures her. She is also charged with the responsibility of lighting the lantern near the top of the house. Further, she is trapped near the house as she is not supposed to go far away from the Manor and must wear metal shoes that keep her close to the ground.

As the years drag on, Miranda learns more about the Manor and finds her way into the dead Captain's study and the attic which holds his beautiful kites. She starts to fly a kite she calls Red Dragon when it gets away from her and is returned to her by a boy named Farley who she befriends behind Wysteria's back. The story becomes more complicated when Wysteria comes down with pneumonia. The townspeople have little sympathy for her and so only the local doctor, Dr. Mead, would come visit her while she was too unhealthy to move to the hospital. During that time, Dr. Mead and Miranda became increasingly acquainted and he filled her in on the history of the Manor (once owned by his family) and Captain Barrows (a dreamer and romantic seduced by Wysteria and likely killed by her). But Dr. Mead is drawn into the evil of the house, obsessed with finding the Captain's legendary fortune.

When Wysteria is taken away from Bourne Manor, Miranda is left to herself and their dogs, the Hounds. She starts spending more time with Farley, who teaches her how to fly with the help of the Captain's kites. Miranda learns that she is meant to fly, that she is "a bird," and that she can never return to life with Wysteria. When Miranda learns that Dr. Mead was corrupted by the Manor and that Wysteria had certainly killed Captain Barrows, she searches the house for messages from Captain Barrows and finds his plans to build a kite that could take him flying. She builds the kite, the Great Heron, with Farley's help and they discover that the Captain's fortune is built into the kites out of hundreds of thousands of dollars. Before Wysteria and the Doctor return her to the Manor, Miranda and Farley take the kite into the air and fly across Lake Champlain where they hope to start a new life and find people like Miranda. The Manor tries to stop Miranda by mesmerizing her but she ends up breaking the lantern, which burned the Manor to the ground as the story ends.