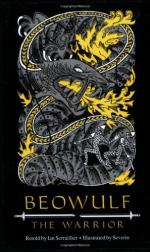 What is the role of religion in Beowulf? How do Beowulf's actions illuminate this role and what seems to be the author's attitude toward religion? Does that attitude change between the three parts?

Explain why Beowulf wills his sword to Unferth even though the other has insulted his honor. Compare this treatment of a coward to Wiglaf's treatment of the eleven soldiers who fled the scene at the battle of the dragon. What do these separate reactions say about each of the two men?

What are the differences in the killing styles of Grendel and his mother? What do these differences say about each monster?

Is the fire-dragon a villain of the same caliber of Grendel and his mother or is he more of an elemental force...