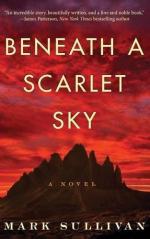 In Chapter 10, Pino and Mimo continue their assistance of refugees, and the refuge cabin is bombed by the partisan ringleader. Pino escorts another group, one of whom he recognizes as being a violinist who played at his parents' house. Soon it emerges that she is pregnant and Pino realizes that she will struggle. She is pressed to leave her violin behind, but she refuses to and a snowstorm starts to close in.

In Chapter 11, Mimo nearly falls into a crevasse and they take refuge inside a shepherd’s hut, which is soon buried in an avalanche. It looks like they will not escape but after a great effort they emerge, and after the pregnant woman becomes scared again Pino skis her to the border. She plays the violin for Pino and Mimo on their way back to Casa Alpina.

Beneath a Scarlet Sky from BookRags. (c)2023 BookRags, Inc. All rights reserved.