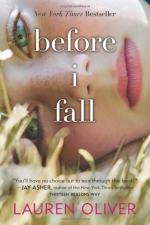 Before I Fall Summary & Study Guide

Lauren Oliver
This Study Guide consists of approximately 50 pages of chapter summaries, quotes, character analysis, themes, and more - everything you need to sharpen your knowledge of Before I Fall.

Before I Fall Summary & Study Guide includes comprehensive information and analysis to help you understand the book. This study guide contains the following sections:

This detailed literature summary also contains Topics for Discussion on Before I Fall by Lauren Oliver.

Cupid's Day is supposed to be the most exciting day of the year for high school senior Samantha "Sam" Kingston and her friends, Lindsey, Ally, and Elody. After attending a huge party with her friends, Samantha gets in the car with a drunk driver, crashes, and dies. For the next seven days, Sam is forced to relive the day of her death, slowly peeling away layers of truth to find a deeper understanding of what it means to love, lose, and live. In the prologue of the novel, the narrator, Sam Kingston, recalls the "greatest hits" of her short-lived life, saying that if she could choose to relive any of those days, she would, but the truth is that when you die, you never know it's going to be your last day. The last thing Sam remembers is laughing with her friends in Lindsey's car, leaving a party, when there's a flash of light, something running in front of the car, and then the squeal of tires, blackness, nothing.

On the first day, Cupid's Day, Sam is more concerned with how many roses she'll receive from her friends, signaling her popularity, than studying for her classes. Today is also the day she's supposed to lose her virginity to Rob. She goes through the day as usual, with her super popular friends, ruling the school and bullying all who annoy her, including Juliet Sykes, the beautiful and quiet girl she and her friends have been bullying since sixth grade. That night, Sam and her friends attend Kent McFuller's party - even though they find him dorky and weird - and are shocked when Juliet dares to confront them in public, calling them "bitches." The girls fight back by calling her a psycho and dumping their beers over her head. Soon the entire party joins in, pouring their beers over Juliet, singing the theme song to the film "Psycho," physically shoving her out of the party. The only person with any sense of outrage is Kent, who stares at Sam with shocked horror on his face. Sam escapes the uncomfortable situation by running to Lindsey's car, and the girls speed off. As they drive away, a flash of white leaps in front of the car and they crash. Sam dies.

On Day Two, Lindsey wakes wondering what has just happened to her. She thought she was dead and now she wakes up to find that it's Cupid's Day all over again. Through the entire day, Sam can't decide if she dreamt the night before, if she's having extreme déjà vu, or if she's just going crazy. As the day progresses, she realizes that she is actually reliving Cupid's Day, and that she has some control over the way the day unfolds. On the third day, Sam attempts to control the situation, thus preventing her death, by doing everything right and being nice to everyone. She convinces her friends not to attend Kent's party and stay in for a movie night instead. She starts to realize that she has feelings for Kent, and that she is no longer attracted to Rob. When everything starts falling into place, Sam is elated. She is positive this plan is going to work and that tomorrow, she will be faced with a new day: February 13. At Ally's house that night, she nervously watches the minutes tick forward on the clock, knowing that the time of her death; 12: 39 is fast approaching. When the clock ticks to 12:40, Sam wants to scream with joy: she has beat death! The celebration is short lived when, an hour later, Ally's mom comes downstairs to tell the girls that Juliet Sykes has killed herself. It becomes clear to Sam that there has been some sort of tradeoff: she has lived, but Juliet has died.

Once Sam realizes that her death and Juliet's death are intertwined, Sam gets to work trying to save them both. On both the fifth and sixth days, Sam tries, unsuccessfully, to save Juliet by sending her roses, speaking to her at the party, and chasing her through the woods. On the fifth day, Sam discovers that the white flash before Lindsey's car crashes is not the brights on oncoming traffic, but Juliet's dress as she hurls herself in front of Lindsey's car. Every day Juliet dies, Sam dies as well. On the final day, Sam wakes with a sense of peace, knowing that the ultimate sacrifice must be made: she must die before Juliet in order to save her. On the final night, Sam pushes Juliet away from the oncoming traffic, taking the full force of the crash on herself, dying in the process. Many readers will be outraged that Sam had to die, but the novel has been building up to this sacrifice since Day One. Although some readers might oppose this idea, in the world that Oliver has created, Sam's sacrifice is what gives her life meaning. She has embraced life and love and that is the true meaning of what it is to live.

More summaries and resources for teaching or studying Before I Fall.

Before I Fall from BookRags. (c)2022 BookRags, Inc. All rights reserved.