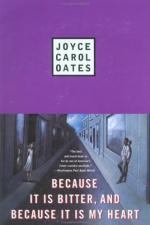 Joyce Carol Oates
This Study Guide consists of approximately 50 pages of chapter summaries, quotes, character analysis, themes, and more - everything you need to sharpen your knowledge of Because It Is Bitter, and Because It Is My Heart.

Because It Is Bitter, and Because It Is My Heart Summary & Study Guide includes comprehensive information and analysis to help you understand the book. This study guide contains the following sections:

This detailed literature summary also contains Related Titles on Because It Is Bitter, and Because It Is My Heart by Joyce Carol Oates.

Joyce Carol Oates' novel of personal pain plays out against a backdrop of social issues in a small New York town in the 1950s and '60s. The two main characters, Iris Courtney, a white girl, and Jinx Fairchild, a Negro boy, come from different worlds that collide when Jinx accidentally murders an obnoxious boy, Little Red Garlock, who has threatened Iris. This heinous act joins Iris and Jinx forever in their secret about Little Red but societal issues prevent any true exploration of their friendship and bond.

Iris is the only child of Duke and Persia Courtney, a dashing couple whose marriage eventually ends when middle age and bad fortunes force them to part. So unlike her vivacious parents, Iris spends her childhood wishing she had a normal life like her classmates but realizes that nothing, not even Iris' sense of security and well-being, can alter her parent's need for excitement. Duke and Persia thrive on dancing, nightlife, and befriending wealthy individuals who let them into their world for temporary entertainment.

Eventually, Persia tires of the insecurity of Duke's gambling lifestyle and leaves Duke to pursue relationships with other men amid an unending string of cocktail waitress jobs and a burgeoning alcohol problem. Iris essentially raises herself due to her parents' self-centered neglect, and this forced self-reliance instills in Iris a strong sense of independence and emotional distance.

The one stable factor in Iris' life is her relationship with her Uncle Leslie, Duke Courtney's brother, who is the exact opposite of the flamboyant Duke. Leslie Courtney begrudges his brother's callous treatment of Persia and makes himself available to Persia and Iris whenever they need security in their lives. Leslie harbors a secret love for Persia, which lasts even after her death of alcoholism in her mid-forties.

Iris and Jinx are bound by their secret over Little Red's murder, and although society will not permit them to explore their relationship, Iris is drawn to Jinx throughout her life in both friendly and romantic ways. As a young black man in the 1960s, Jinx finds high school basketball stardom, which gives way to reality when he is forced to work at low-paying jobs, marry and have children, and eventually die in the Vietnam War. Iris leaves her small town to attend college in Syracuse, New York, where an art professor and his wife, Dr. and Mrs. Savage, befriend her and introduce her to a genteel way of life.

Iris misrepresents her past life to the Savages in order to be accepted into their way of life, fully aware that someone of her troubled past would not normally be allowed entrance into their lives and position in society. Internally, Iris continues to struggle with reconciliation of her past and her future, and there are moments of uncertainty and angst, but Iris eventually marries the Savages' son, Alan, in an attempt to rise above her personal history and entrench herself into a life of security and wealth. Ironically, Iris has achieved the lifestyle that had eluded Duke and Persia in their quest to live graciously among the wealthy even though her piece of mind and sense of belonging will always be in question.

Because It Is Bitter, and Because It Is My Heart from Gale. ©2005-2006 Thomson Gale, a part of the Thomson Corporation. All rights reserved.