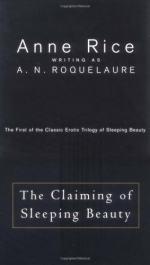 Anne Rice
This Study Guide consists of chapter summaries, quotes, character analysis, themes, and more - everything you need to sharpen your knowledge of Beauty's Punishment.

Notable features of the Court include the Training Hall, Bridle Path and the Hall of Punishments. Ultimately, each slave ends up in each place for infractions real or imagined. The Court believes that in order to be taught, the slaves need to be beaten and humiliated on a daily basis.

Once a year, the Spring Auction takes place in the local village. People save money all year in order to attend and bid on potential...

More summaries and resources for teaching or studying Beauty's Punishment.

Beauty's Punishment from Gale. ©2005-2006 Thomson Gale, a part of the Thomson Corporation. All rights reserved.